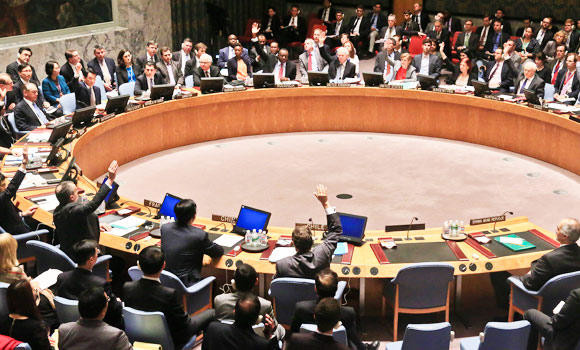 The National Society for Human Rights (NSHR) has strongly condemned Russia and China for vetoing a UN Security Council resolution to refer the Syrian crisis to the International Criminal Court (ICC) for investigation into possible war crimes.
In a move deemed as “immoral” and “disgraceful,” the two allies of Syrian President Bashar Assad have gone the extra mile to protect the Syrian regime, NSHR’s vice chairperson Saleh Alkhathlan said here Saturday.
He said: “The NSHR strongly condemns the veto by Russia and China.” Moscow and Beijing used their veto power on Thursday for the fourth time to thwart a resolution against Syria.
A total of 61 countries, including Saudi Arabia, the UAE, Qatar, Tunisia and Libya among the Arab countries, co-sponsored the French draft and urged other UN member states, in a public message and letters, to do the same and for the UN Council to adopt it.
“This is an immoral act that can’t be justified and is another proof that Russia and China are not to be expected to act in a responsible manner when it comes to international human rights issues,” said Alkhathlan.
“The veto will give the Syrian regime more support to keep on killing innocent citizens with warplanes and explosives.”
“It also sends a disturbing message that the international community can’t guarantee the protection of civilians caught in times of war,” said the NSHR deputy chief.
“We believe that the veto must not be the end and that a special tribunal should be set up to try all criminals in Syria committing war crimes and crimes against humanity.”
The resolution proposed that both the Assad government and his rival militants be tried at the ICC.
Alkhathlan said that the NSHR will try to contact human rights organizations in the region to issue a statement condemning Russia and China for their inhumane and irresponsible attitude.
Amnesty International and Human Rights Watch have also termed the veto as “callous” and disgraceful, saying that the two Assad allies have used their veto for the fourth time to push back any action against the Syrian regime.
Samantha Power, US ambassador to the UN, also accused the Russians of providing diplomatic protection to the Syrian government “no matter what it does.”
British Foreign Secretary William Hague said he was appalled by the Russian and Chinese veto. In a statement published after the vote, he said Russia and China would have to justify “why they are continuing to shield those responsible for the most horrific atrocities.”