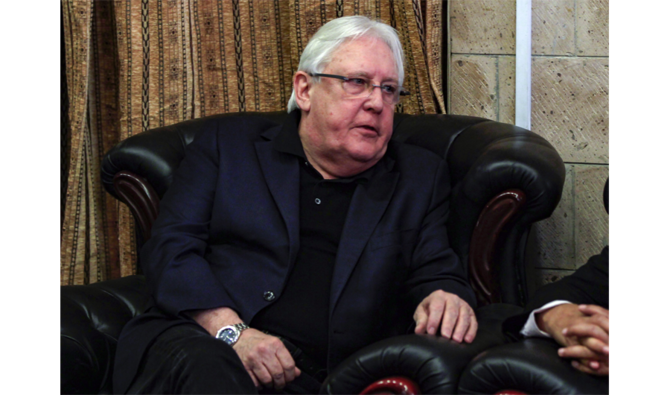 The meetings take place ahead of the planned peace negotiations in Sweden early next month that aims to find a political solution for the strife in that war-torn country.

He will also hold consultations with Yemeni Foreign Minister Khalid Al-Yamani and possibly with a few officials of the Gulf Cooperation Council (GCC).

He said Mohammed Ali Al-Houthi, head of the Houthi militia’s Higher Revolutionary Committee, met in Sanaa with the UN envoy on Saturday.

Griffiths said he discussed with Houthi militias “how the UN could contribute to keeping the peace in the key port city of Hodeidah.”

Fayyadh Noman, the undersecretary of the Yemeni Information Ministry, said: “The Yemeni government’s delegation is ready to go to Sweden and has full powers to hold fruitful consultations. But we hope the militia’s delegation has full rights as well. It should not keep us waiting for hours for their reply from Sanaa and Tehran to any proposals by the UN envoy.”

Noman expects Griffiths to specify the date for consultations during his meetings in Riyadh.

According to reports, the visit of the UN envoy is significant keeping in view the proposed peace talks aimed at ending the war in Yemen, which have been set for early December in Sweden.