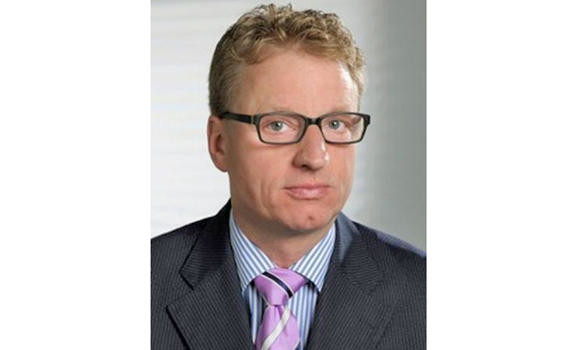 RIYADH: German giant ThyssenKrupp has announced plans to expand its operations in the Middle East, which will create thousands of new jobs for Saudis and Gulf nationals.
The plan has got a new fillip after ThyssenKrupp Industrial Solutions signed a prestigious deal last week with the Kingdom’s Yamama Cement Company to build two new cement plants at a cost of about half a billion euros.
In an exclusive interview, Jens Michael Wegmann, CEO and chairman of the Executive Board of ThyssenKrupp Industrial Solutions, said: “We have achieved a very exciting milestone in the development of the cement project in Saudi Arabia.”
“ThyssenKrupp has been entrusted with the task to build the two new cement plants with an overall capacity of 20,000 tons of clinker,” he added.
Speaking in the interview on the sidelines of the cement project signing ceremony in Riyadh, Wegmann gave an overview of ThyssenKrupp’s growing global operations with special reference to the Middle East including Saudi Arabia.
Riyadh Governor Prince Faisal bin Bandar, German Ambassador Boris Ruge, Thomas Dreiling, CEO of ThyssenKrupp Saudi Arabia Contracting Ltd, and senior executive Knud Ledeboer attended the signing ceremony.
Referring to the progressively growing operations in the Middle East, Wegmann said: “As part of the integration and regionalization of its businesses, the firm aims to be close to its customers and participate more strongly in growth in the regions.”
To this end, it must be noted that ThyssenKrupp has announced the appointment of Boris van Thiel as CEO for the Middle East and North Africa (MENA), effective Dec 1 this year. In fact, this German giant company has established regional cluster operations in the Americas, Sub-Saharan Africa, India, MENA, Asia Pacific and CIS with a view to pooling know-how, making better use of existing resources and standardizing processes.
Referring to the new brand identity, Wegmann said that ThyssenKrupp has launched a new brand identity, common brand for all Group companies.
The new brand reflects a fundamental transformation to the diversified industrial group with more focus on customers, he added.
In the future, ThyssenKrupp will use one common brand the world over.
The redevelopment of the brand reflects the transformation of the Essen-based technology company to a diversified industrial group.
He said that the new brand puts a stronger focus on customers and its unmatched technology as well as services.
“The new identity communicates the company’s positioning as a diversified industrial group and its aspiration to work in an integrated way, leveraging internal synergies and creating added value for customers, employees and shareholders,” said the ThyssenKrupp chief, while referring to the growing presence in Saudi Arabia.
He also said that “enjoying the long relationship now, this new cement project in the Kingdom is really exciting one.”
Commenting on the deal with Yamama, Wegmann said: “This is a very significant cooperation between two major companies as it is an ambitious project bringing the very best German technology on the table to create the base for perfection in the construction sector.”
Commenting on the project township, he pointed out that we are working on it for the employees and related staff with the work, high standards and the timing for the project to be delivered in view.
He added that the project delivery date is about 39 months from the date of signing.
Commenting on performance of the company, he said ThyssenKrupp has done very well as a whole recording a remarkable growth of 26 percent in terms of profits.
“At Yamama, we will build full-fledged TPC plant as we wish to build and stay for the services and life cycle support that’s the whole strategy here,” he noted.
“The clear goal is to reduce workload and help technically to help the brand create its own value for industrial solution with reliable and sustainable engineering solution utilizing the advance technology for our global footprint,” he explained.
Commenting on the Middle East market, he underscored that “the business climate is very good.”
He, however, noted that “the relationship between us and the client is even more closer because from now on we have to do utmost to make it really happen, of course we cannot prevent things from happening, lets say outside of the country, but we are fully committed to support the clients and to reach them.”
On the issue of a large number of refugees traveling from this part of the world to Europe and the notion that there is a good and bad perception, Wegmann expressed the advantages and disadvantages of the refugees’ migration.
“Good perception is that they have a large number of young workers who can work in the European factories, what is his perception as a businessman,” he said.
But, “the fact is that there is a tough situation… I mean for Germany it is a balance between chances, risk and opportunities,” said Wegmann, while pledging all support to the German government in their initiatives of rehabilitation.
“Some companies launched a small program to engage and hire some engineers, technical people to work but in comparison their total number, it is very small, but there is commitment to doing that and we are out there to support,” he said.
“I think it’s a very dramatic situation… I mean there are many poor people who really need the support of society but the challenge is to balance between help, support at the same time make sure that you do it in a professional way,” remarked Wegmann, adding that the task to register the refugees with full details is also a massive one as an efficient data base only can make sure who is there and how to support them.
“I think, Germany has extended, as a nation, great support to the refugees,” said Wegmann.