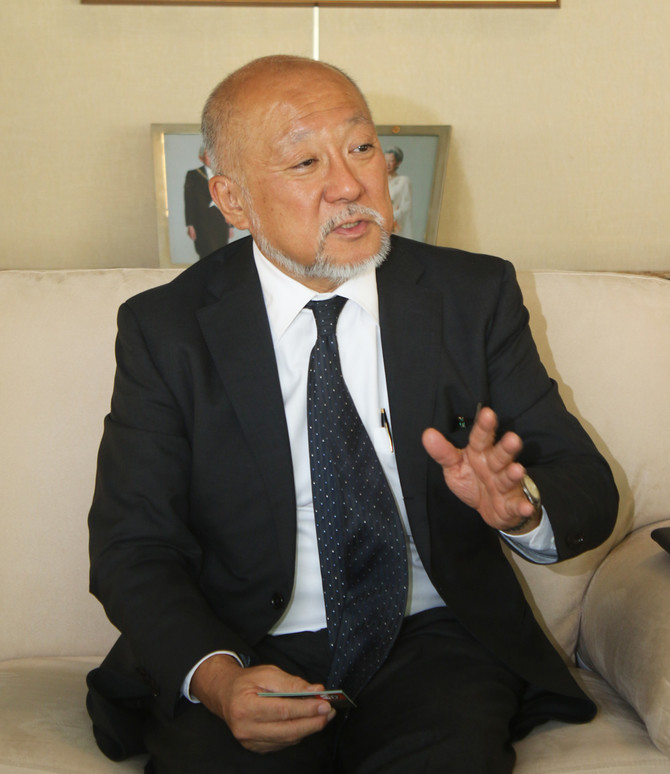 In an exclusive interview to Arab News on Sunday, the top diplomat said Japan has trained more than 10,000 Saudi engineers and technical personnel and will lend further support for an ambitious training program as part of the commitment of the Saudi-Japan Vision 2030 Committee.

Uemura said that the two countries were accelerating efforts to implement several important joint projects in the Kingdom, including those intended to improve business and investment environments.

The Japanese envoy said: “Saudi-Japan Vision 2030 has mapped out the outlines of the strategic partnership under which the two countries will establish 46 government-level projects.”

“The plan is to involve about 44 ministries and institutions in the domain of public sector partnership, while 36 businesses including major companies signed memoranda of understanding,” he added.

He said an office of Saudi-Japanese Vision 2030, a joint panel established by the two countries to pursue the objectives of the Saudi Vision 2030, had been opened in the Saudi capital.

Divulging details of the entry of mega Japanese banks in Saudi Arabia, Uemura said: “Mizuho Bank has been operating in Saudi Arabia since 2009, Sumitomo Mitsui Banking Corp. has already established a subsidiary focusing on consulting business this March. Mitsubishi UFJ Bank will also establish a full-fledged subsidiary in Riyadh this October.”

He said these financial institutions will also provide advisory services to Japanese companies that are considering tapping into business in Saudi Arabia.

The Japanese envoy also pointed out that the Saudi government had teamed up with Japan’s SoftBank to form a $93 billion investment fund called the Vision Fund to fund projects that will help the Kingdom to diversify its economy.

The SoftBank and PIF, Saudi Arabia’s sovereign wealth fund, are also in early talks with banks about potential funding for the world’s biggest solar power project, which is being built in the Kingdom, said Uemura.

He said Riyadh and Tokyo will also explore the establishment of Enabler Showcase Zone, which will be a showcase model of economic reform, and to invite more investment by Japanese companies into Saudi Arabia.

On the cultural front, the two countries had forged closer ties, said the diplomat. He said a 22-minute animated movie, the first joint product of Saudi Arabia and Japan, has been broadcast recently.