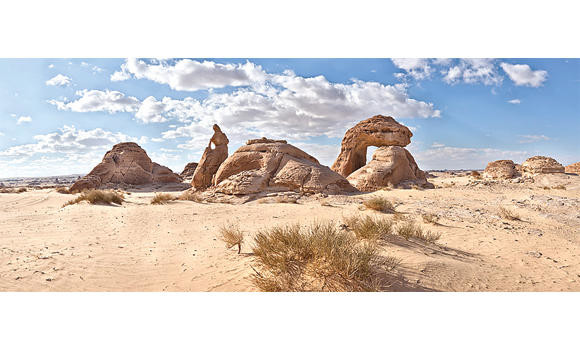 RIYADH: A number of recent archaeological discoveries show that Tayma in Saudi Arabia has been inhabited since the Bronze Age, around the 4th millennium BC.
Recently, the Saudi Commission for Tourism and National Heritage (SCTNH) announced the discovery of a rock near Tayma bearing an inscription of Egyptian pharaoh Ramesses III (1186–1155 BC). This was the first confirmed find of a hieroglyphic inscription on Saudi soil.
Based on this discovery, researchers have hypothesized that Tayma was part of an important land route between the Red Sea coast of the Arabian Peninsula and the Nile Valley. Hence, Tayma, a large attractive oasis located in the northeastern part of Saudi Arabia, some 264 km southeast of Tabuk and 400 km north of the holy city of Madinah, has emerged as a major historical and tourist destination for one and all.
In the center of Tayma is a large well, thought to be around 2,500 years old. It is also mentioned in the Bible. The famous Tayma stones, inscribed in Aramaic, of two millenia or older, are now in the Louvre Museum of France, but thousands of other inscriptions of pre-Islamic Thamudic script have been found in the area and are stored in the city’s museum.
The city had long been a stopping place for caravans crossing the deserts of Arabia. According to SCTNH Vice President Ali Ibrahim Al-Ghabban, the discovery of the inscribed rock indicates that Tayma was on an important land route between the western coast of Arabia and the Nile Valley. The route connected the Nile Valley, Port Qulzum, the city of Suez, and then to Srabit near the port of Abu Zenima on the Gulf of Suez.
Tayma is also mentioned in ancient Assyrian texts dating back to the 8th Century BC, and is referred to numerous times in the Hebrew Bible. Babylonian King Nabonidus spent 10 years in Tayma. His royal complex is currently being excavated. Last year a fragment of a cuneiform text mentioning Nabonidus was discovered there.
The oldest mention of the oasis city appears as “Tiamat” in Assyrian inscriptions. The oasis developed into a prosperous city, rich in water wells and handsome buildings. Not only this, cuneiform inscriptions possibly dating from the 6th Century BC have been recovered from Tayma.
There are three main factors which impact on the historical interpretation of Tayma: The existence of an oasis as a precondition for the settlement of humans; its function as a trade-station on the incense route; and the residence of the Babylonian King Nabonidus in the mid-6th Century BC.
As late as the 11th century, according to historian Al-Bakri, Tayma was known as a wealthy place with a large city wall. Archaeological investigation of the site is ongoing.
There are several places to see and explore in Tayma and around that old city. One of them is Qasr Al-Ablaq, which is located on the southwest side of the city. It was built by poet and warrior Samuel ibn Adiya and his grandfather Adiya in the 6th Century.
Another attraction is Qasr Al-Hamra built in the 7th Century. Other places of historical importance include Qasr Al-Radhm, cemeteries, Qasr Al-Bejaidi, Al-Hadiqah Mound and Tayma Museum of Archaeology and Ethnography.
Many artifacts from Tayma’s history are exhibited in other museums. Early finds such as the “Tayma Stele” are at the Louvre in Paris, while the National Museum of Saudi Arabia in Riyadh and the Jeddah Regional Museum of Archaeology and Ethnography also have significant collections of items from, or related to, ancient Tayma.