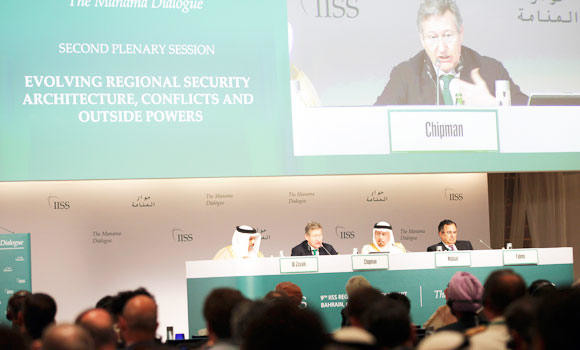 The Syrian crisis and the Iranian nuclear accord will take the center stage in discussions Tuesday among the heads of government of the six-nation Gulf Cooperation Council in Kuwait. The topic of peace between Israel and Palestine will also be on the agenda besides a plan to form a strong GCC police force on the model of the Europol and Interpol that has already been approved by Gulf interior ministers” said Abdullateef Al-Zayani, GCC secretary-general, here on Saturday.
Foreign Minister Prince Saud Al-Faisal will travel to Kuwait to attend the GCC ministerial meeting on Monday to review the agenda of the two-day Gulf summit, said Osama Nugali, a spokesman of the Ministry of Foreign Affairs, while speaking to Arab News. In a brief telephone interview, Nugali said: “The Royal Court will shortly announce the composition of the delegation that will attend the 34th GCC summit.”
Referring to the provisional agenda of the summit, the GCC chief said all key regional and international issues amid the fast-paced developments and the challenges facing the Gulf region will be taken up for discussions. At the forefront of these developments are the recent nuclear agreement between Iran and the Group of 5+1 and the 32-month Syria conflict that has claimed the lives of over 125,000 people.
The situation in Egypt, Yemen, Iraq and several other countries located in the extended neighborhood of the Gulf will also be discussed by the leaders. Al-Zayani said the summit would review the GCC Ministerial Council's recommendations especially those related to fight against terrorism and corruption, protection of oil facilities and traffic cooperation as well as the implementation of the unbinding strategy of e-governments of Gulf countries.
The Saudi proposal to transform the GCC into a GCC Union will feature on the agenda, he added. On the commercial front, the GCC leaders will consider several proposals to give “impetus to trade exchange and pan-Gulf investment.”
They will discuss means to expand cooperation with the world's major economies, mainly the United States and the European Union. The Gulf leaders will touch upon the joint GCC-Turkey plan of action for trade and investment during the period 2013-15.
The summit will also study new measures to bolster the bloc's strategic partnership with Morocco and Jordan, which are working closely with the alliance to eventually become member states of the GCC.
The GCC aims to enhance cooperation with the two countries in the fields of environment, renewable energy, education, scientific research, economy, tourism and food security, among others.
The GCC heads of state will review the progress achieved in the implementation of the Gulf-brokered power transition deal in Yemen. The Kuwait summit is also expected to witness the launch of a common GCC Radio Station.
The summit coincides with Kuwait taking over the rotating presidency of the GCC from Bahrain.