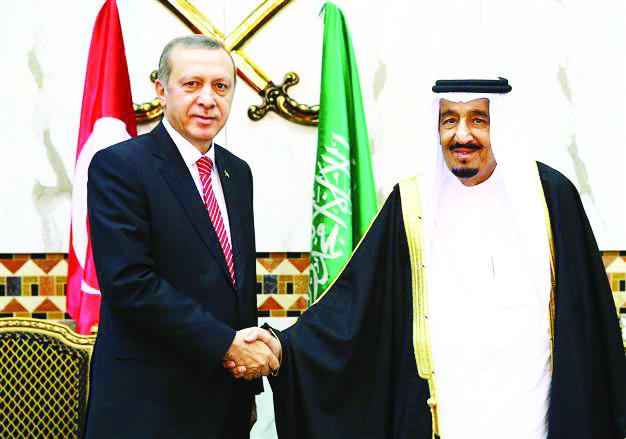 “These growing economic ties are strongly backed by identical approaches on the whole range of bilateral and regional issues,” said Yunus Demirer, Turkish ambassador, here.
Demirer, who gave an overview of Saudi-Turkish relations in an interview on the occasion of the Republic Day of Turkey, said that “the two-way trade between the Kingdom and Turkey has been in the region of SR30 billion annually.”
He also spoke about growing Saudi-relations in other sectors, his country’s commitments to help solve regional problems and the support extended to over two million Syrian refugees currently taking shelter in that country.
Referring to the progressively growing commercial relations, the ambassador said that trade between Turkey and Saudi Arabia has been growing consistently.
Around 80 percent of Turkey’s exports to the Kingdom are industrial products whereas agricultural products account for 10 percent in the exports.
On the other hand, the bulk of Turkey’s imports from Saudi Arabia come from crude oil and petrochemical products.
A close observation of that import shows that the share of crude oil in total imports declined from 79 percent to below 40 percent between 2000 and 2014, while the share of petrochemicals increased drastically (the value of imports of polypropylene rose to $1 billion ) in the same period.
On the other hand, the decrease in the last two years was mainly related with the decline in crude oil prices.
Speaking about the upswing in trade and investment, Ambassador Demirer said that there is a genuine opportunity to establish a long-term partnership between Turkish and Saudi business communities.
Saudi visitors feel at ease in Turkey, says the envoy, while adding further that Turkey is among the world’s top 12 producers of building materials such as cement, glass, steel and ceramic tiles.
“As neighbors and two of the world’s oldest civilizations, Turkey and Saudi Arabia have shared a long history of religious, cultural, scientific, and economic linkages,” said the envoy, adding that Turkish imports from Saudi Arabia have been traditionally dominated by mineral fuels.
Petrochemical products are the second largest category of Saudi exports to Turkey as said earlier. On the other hand, Turkish exports to Saudi Arabia are much more diversified.
Steel and iron products tend to dominate Turkish exports, followed by machinery and transport equipment, agricultural and textile products.
He said that “the depth and diversity of our relations, our joint commitment to stability and well-being of the region as well as our intertwined interests lead our two countries to foster the existing relationship to higher and new levels of cooperation.”
Referring to the investment climate in Turkey, a Turkish government report said that the structural reforms carried out by the government in the last decade have improved the investment climate, which in turn attracted substantial Foreign Direct Investment (FDI).
Legislation on investment was streamlined along global standards.
At present, Turkey has a foreign capital-friendly legislation and transparent regulatory system.