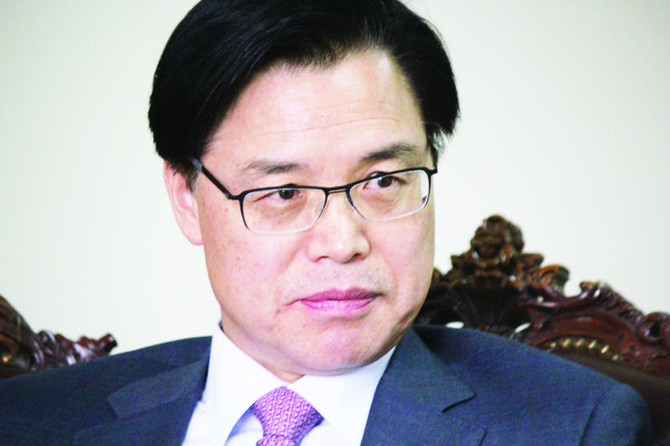 RIYADH: South Korea will hold its first-ever health care road show in the capital in January to showcase its world-class health facilities and promote cooperation in the health care sector.
The road show will feature the Korean experience, especially as how technology and health care are interconnected and how they can work together for the benefit of the two countries.
This was disclosed by South Korean Ambassador Kwon Pyung-oh in a wide-ranging interview with Arab News here Tuesday.
Pyung-oh, who gave an overview of commercial cooperation between South Korea and the Kingdom with special reference to the growing ties in the health care sector, said the Korea-Saudi Healthcare Cooperation Road Show would be held on Jan. 24.
Commenting on relations between South Korea and Saudi Arabia in the health sector with reference to Saudi students pursuing medicine or health studies, Pyung-oh made a striking reference of 2012 cooperation, when the two countries signed an agreement on cooperation in the field of health care that includes education and training of health care professionals, transfer of medical techniques as well as research and development (R&D) in health care and pharmaceutical fields.
Since then, Saudi and Korean governments have been discussing several government to government (G2G) projects. "In this field, we are at the final stage of discussion on six projects in health care and medicine, which include evaluation of health and medical technology and strengthening R&D management capability (Korea Health Industry Development Institute), proposal for the technology transfer and co-­development for the AVATAR scan system and the adult neural stem cell therapeutics between the King Fahd Medical City and the Samsung Medical Center (KFMC-SMC).
Other projects include proposal for the establishment and operation of Neurosciences Research Center at the National Neurosciences Institute (Gachon University Medical Center), establishment of the Clinical Trial Infrastructure (Korea National Enterprise for Clinical Trials), Quality Assessment and
Development of Clinical KPI System (Health Insurance Review and Assessment Service) and Sejong­-Prince Sultan Heart center, with the heart center to be built and commissioned.
When it comes to education and training, physician training of Saudi doctors and dentists in Korea is opt to a successful start and currently, 45 doctors and dentists are under physician training at various Korean hospitals. "As of December 2015, four doctors have completed the training, 31
doctors and 14 dentists are under training," the ambassador said.
He said: "Health care in South Korea is modern and one of the most efficient in the world, which has recorded remarkable growth in a very short period of time with the unique blend of Western and Eastern medical practices."
Doctors, dentists, dermatologists and other specialists in South Korea are all affordable and readily available, as are general health care products and pharmaceutical drugs, he added.
Speaking on their health care system Pyung-oh iterated, “Korean health care system has recorded remarkable growth in a very short period of time due to strong reasons that include top level medical technology.”
Citing statistics from National Cancer Information Center, Korea for 2015, the envoy said that the efficient health care system with modern medical technologies has done wonder for instance five-year survival rate of cancer patients in Korea surpassed that of the United States.
"Moreover, the medical costs are cheaper like if we do cost comparison for surgeries, including heart disease and joint surgery, it is 33 percent cheaper than the United States, 67 percent of Japan and 90 percent of Singapore," the envoy said, adding that highly talented health care professionals provide service with the fusion of medical and IT technology offering a quick diagnosis and treatment system.
About the health care facilities South Korea offers to Saudis and other Gulf nationals as part of its initiative to promote health tourism, Pyung-oh said: "To promote health tourism from Middle East countries, Seoul has established the institutional cooperation system. Korea had a patient referral agreement with the UAE government since Nov. 2011 and with the UAE Armed Forces since 2013," he noted.
"Currently, we are discussing it with the Saudi authorities seeking the possibility of similar agreement," he added. Moreover, we can witness the increasing trend of patients’ visit from the Middle East every year to avail better health services in Korea. In 2014, Korea received around 5,500 patients from the Middle East countries including 2,600 from UAE and 1,200 from the Kingdom, he said.
With the increased number of UAE patients seeking treatment in Korea, the Korean government is planning to open a pre-post care center (PPCC) in the UAE in the first half of 2016, which will provide support for diagnosis before patients’ arrival and follow-up after their return to home country. In addition, the Korean medical facilities are organizing medical training and building rapid response measures for inquiries, the envoy added.
"We believe all the measures will contribute to improve the quality of health tourism for the Middle East patients," he noted. Commenting on main policy priorities of the Korean Ministry of Health and Welfare (MoHW), he said that the Korean government is currently pursuing several projects in the health care field that include strengthening the capacity for infectious diseases such as the Corona-virus Middle East Respiratory Syndrome (MERS-CoV).
Besides, a program — Act on Support for Overseas Expansion of Healthcare System and Attraction of Foreign Patients — was enacted recently and is scheduled to be entered into force in June 2016 in order to enable Korean health care facilities to operate in overseas markets.
Commenting on increasing R&D investment, Pyung-oh said: “As of 2015, the Korean government has invested $206 million in R&D for new drugs with $115 million from the MoHW and creating funds between government and the private sector.”