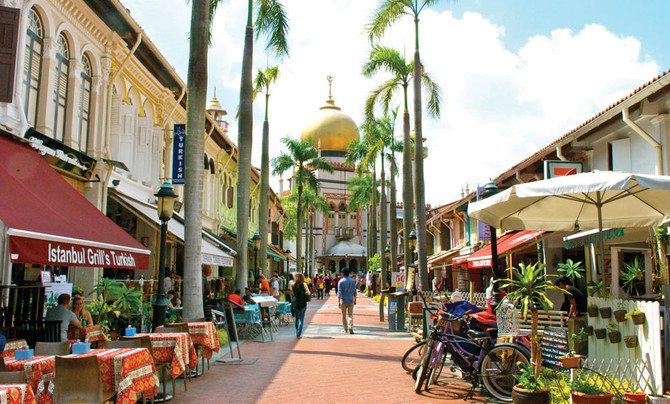 A bridge between East and West for the last several centuries, Singapore is synonymous with both rich traditions and modernity – all of which make it a favored destination for many.
With its colorful ethnic areas and modern business centers, and lush-green gardens set against sleek high-rise buildings and skyscrapers, Singapore today is a fascinating destination for both leisure and business travelers.
Over the years Singapore, an island city-state with a global financial center and a tropical climate, has witnessed remarkable transformations in its tourism landscape and has achieved record growth in both tourism receipts and visitor arrivals. Singaporean government agencies work closely with local and international investors to develop new world-class attractions and bring strategic business and leisure events to Singapore.
Some of the exciting plans include the remaking of Orchard Road into one of the best shopping streets in the world, the development of the Singapore Flyer (the world’s largest observation wheel), the renovation and transformation of Sentosa Island as a tropical resort, as well as improvements of major areas such as the Singapore River, Chinatown and Little India.
These attractions, after massive rejuvenation, will broaden Singapore’s range of entertainment choices and increase the vibrancy of its tourism industry. The government is also investing $700 million over the next five years in order to increase tourism through strategies that tackle short-term challenges – such as uncertainties in the global economy – while positioning Singapore for long-term growth.
Singapore is one of the few countries in Asia that focuses on developing its tourism, and makes all-out efforts to attract both business people and tourists. This is evident from the fact that several new projects have been launched by Singapore to modernize its urban centers beyond the imagination of most people.
One such program is driverless cars on the roads of Singapore. In fact, the UK-based Delphi Automotive PLC has been selected by the Singapore Land Transport Authority (LTA) as a strategic partner to implement autonomous mobility concepts. As part of this contract, Delphi will provide a fleet of fully autonomous vehicles and will develop a cloud-based mobility-on-demand software suite which will open new potential autonomous markets.
Not only this, Singapore’s main downtown shopping street, Orchard Road, now has high-tech trash bins with Wi-Fi. This innovative step is backed by the government which is also committed to ensure proper cleanliness, health and hygiene. Singapore today can claim to be the cleanest country in South Asia, one of the best in offering health care and one of the top countries in applying and exporting high-technology to other nations.
In terms of tourism, Singapore has much to offer. The opulent Marina Bay Sands Resort is an example of great modern architecture. It includes a hotel, shops with high-end luxury brands, a mall with a canal running through it, and the Marina Bay Sands Skypark — a very high point from where the whole city can be seen. From the skypark, one can see the innovative double helix bridge, the port, the Gardens by the Bay, and the city’s impressive skyline.
The Singapore Flyer, the world’s largest giant observation wheel, is another must-see attraction. As is Sentosa Island – to which no trip to Singapore is complete without a visit. Thrill-seekers will be delighted to find some exciting rides and amazing roller-coasters here. The island is also home to Fort Siloso, a military museum beside a massive aquarium with some 500 species of sea creatures including fish and crabs.
Gardens by the Bay is another attraction. Wandering through the Bay East Garden gives perfect enjoyment because of its cluster of iconic futuristic structures designed to perform environmentally sustainable functions. Not to be confused with the Gardens on the Bay, the botanic gardens in the vicinity of the city are also worth a visit. In fact, Singapore received its first UNESCO World Heritage nomination for the botanic gardens – and with good reason.
In another part of the island city is Chinatown. From the small stores and authentic Chinese food to the red lanterns and gifts for sale, there is much excitement and activity in the district. One can visit the Chinese Heritage Center to learn about the place and also about the Chinese influence on Singapore. In addition to Chinatown, there are also ‘Little India’ and ‘Arab Street’, where a tourist from the Middle East will feel right at home.
In fact, one of the most exciting aspects of Singapore is the diversity of the city and its neighborhoods. Nowhere is this more evident than in Little India and Arab Street, where one can see and buy a large number of products from the Arab world and India. In the Arab Quarter tourists can visit the historic Sultan Mosque, originally built in 1825, with distinctive golden domes and unusual craftsmanship.
Another fascinating tourist spot is Singapore Zoo which is billed as the world’s best rainforest zoo. The zoo is clean and inviting with orangutans, chimpanzees, zebras, mole rats, white tigers, kangaroos, and other creatures.
Singapore is relatively easy to explore and has a modern metro system that makes getting around not only simple but cheap. A large number of hotels and restaurants including those serving halal food are in the city center. One of the hotels, Royal Plaza on Scotts in Singapore, offers five-star living and dining facilities and is famous for its halal food. The hotel rooms of Royal Plaza have prayer rugs; the Singapore Tourism Board takes great care of tourists traveling from the Middle East and Muslim countries.
The board has said that the first six months of the year saw international visitor numbers to the Asian city-state increase by 10.3 percent year-on-year to 11.3 million. The rise in tourism was driven by good growth rates from some top source markets including China, Indonesia, India and – not surprisingly – the Middle East.