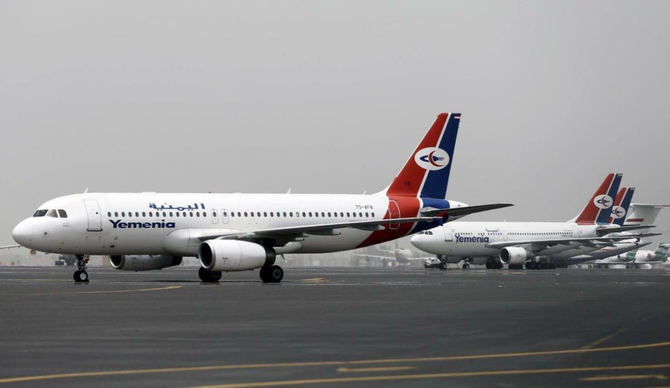 RIYADH: Commercial flights in and out of Yemen will resume on Sunday after the Saudi-led coalition fighting to restore the legitimate government lifted a week-long ban.
The coalition closed all air, land and sea ports to stem the flow of weapons to Houthi rebels in Yemen after an Iranian-supplied ballistic missile was launched at Riyadh from Houthi-held territory on Nov. 4. Saudi defense forces shot the missile down and there were no casualties.
The Houthis have fired more than 70 missiles into Saudi Arabia in the past two years, but the Riyadh attack was the deepest into Saudi territory.
“Flights by national carrier Yemenia to the coalition-controlled cities of Aden and Seiyun will resume on Sunday,” Yemeni Transport Minister Mourad Al-Halimi said on Saturday.
Sohaib Al-Hamdan, a travel agent, said: “The resumption of flights will help to ferry Yemeni and non-Yemeni passengers bound for Yemen, who have been waiting in transit at various locations.
“Several of the 26 Yemeni airports are currently not operational, and flights are neither taking off nor landing at those airports for security reasons.”
The Yemeni government-held southern port of Aden reopened on Wednesday, but ports in Houthi-held areas are still closed.
The Yemeni Vice President Ali Mohsen Al-Ahmar praised the Arab coalition for supporting the legitimacy of his government. He said Yemen was at an extraordinary stage, and that the Houthi coup had caused great suffering.
The Iran-backed Houthi militias were a danger to the region and a threat to international peace and security, Al-Ahmar said.