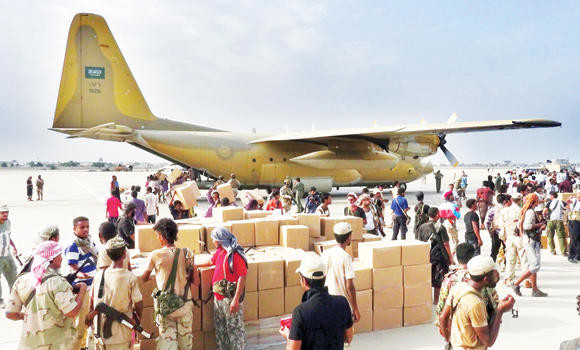 RIYADH: Saudi Arabia and the UAE have stepped up aid delivery to Yemen with two planeloads of relief supplies — one Saudi and the other Emirati — landing at Aden’s airport Friday.

“A plane carrying relief supplies landed at Aden airport Friday,” confirmed Maj. Gen. Ahmed Al-Assiri, spokesman of the Saudi-led coalition Friday. He said: “Aden is safer than ever and reopening this international airport is a positive step. The airport requires a lot of repair and rehabilitation work as a result of the heavy bombardment by Houthi militants.”
The Saudi aircraft, which arrived at midday, also brought medication for cancer patients.
Rafat Al-Sabbagh, a spokesman of the King Salman Center for Relief and Humanitarian Aid for Yemen, said: “The cargo plane belonging to Royal Saudi Air Force arrived in Aden with 12 tons of medical supplies.” Abdullah Al-Rabiah, director of the center, said: “Naval convoys carrying humanitarian aid have also started to arrive at the port of Aden.”
The Emirati plane also carried medical supplies from the Red Cross and the UAE to be distributed among the patients.
“If the Aden airport resumes regular operations, then Yemen is expected to be able to expedite the import of badly needed emergency humanitarian aid,” said a Yemen embassy official.
The Emirati plane, which landed at dawn, brought medical supplies from the UAE Red Crescent, an airport official said. The first plane to land at Aden airport since anti-Houthi forces took over was Saudi, carrying weapons and military assistance. Aden has suffered especially, with acute shortages of food, medicine and fuel.
The Kingdom has been on the forefront in terms of aid and relief supplies to Yemen and other countries in the region. Saudi Arabia also announced $274 million in humanitarian aid for that Arabian Peninsula nation in April this year.
In the latest military action, coalition warplanes bombed targets across Yemen including the capital Sanaa on Friday, according to security sources.
They bombed several districts in Aden, including Dar Saad, Hael and al Khadra and targets in Marib, Shabwa, Abyan, Taiz and Amran provinces.
Rocket attacks on Aden killed on Thursday night three people and wounded 57, according to Al-Khader Laswar, a health official in the city.