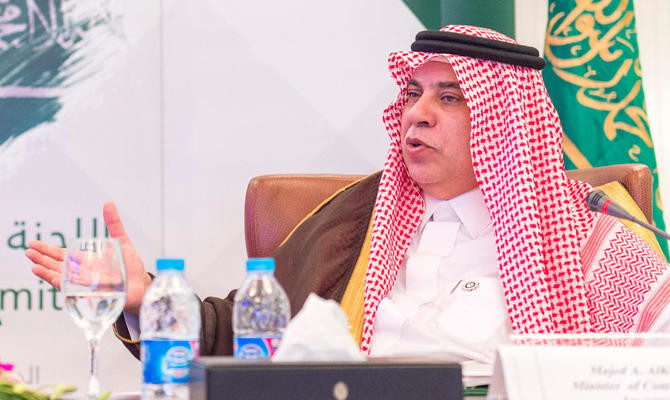 RIYADH: Saudi Arabia and the UAE topped the Arab world in the global competitiveness index announced by the World Economic Forum (WEF), which uses a new methodology to fully capture the economic dynamics of 140 countries globally.
The Kingdom, according to the report, has advanced to 39th position on the WEF Global Competitiveness Report for 2018, up two places from its ranking last year.
“The ranking, the Kingdom’s best since 2012, came despite the changes in the assessment methods this year,” said a statement, citing Majid Al-Qassabi, minister of commerce and investment, here on Sunday.
Al-Qassabi said: “The integrated work of more than 40 government agencies is one of the most important factors that led to an improvement of the Kingdom’s ranking in the 2018 report.”
Al-Qassabi, who also chairs the executive committee of Tayseer, said the move to unify efforts of government agencies “contributed in addressing the constraints and challenges, and supporting the private sector in the Kingdom.” Tayseer is an initiative that aims to secure and stimulate the investment environment for the private sector and provide the necessary guarantees for the preservation of rights.
The WEF report said Saudi Arabia achieved a full score of 100 percent in the macroeconomic stability index among other countries in the region. In terms of market size, the Kingdom ranked 17th with 76.3 points, thanks to its high gross domestic product. This year, the WEF increased the number of countries under coverage to 140, which affected the ranking of many countries including the Kingdom. Saudi Arabia also ranked third among Arab countries and 39th globally, supported by its conducive macroeconomic environment, a modern infrastructure, and a large market size. The UAE ranked 27th out of 140 countries, maintaining its position of last year, thanks to being first globally in macroeconomic stability conditions.
The report said that Oman ranked 47th globally, up 14 places from last year, and became fourth in competitiveness in the Arab world. The ranks of the other Arab countries globally are as follows: Bahrain (50), Kuwait (54), Jordan (73), Morocco (75), Lebanon (80), Tunisia (87), Egypt (94), and Yemen at the 139th spot.
The key finding of the report is that the changing nature of economic competitiveness in the world is becoming increasingly transformed by new, digital technologies and creating a new set of challenges for governments and businesses, which collectively run the risk of having a negative effect on future growth and productivity.
According to the report, the 10 most competitive economies are the US, Singapore, Germany, Switzerland, Japan, the Netherlands, Hong Kong, the UK, Sweden and Denmark.
The report further explains that the competitiveness performance in the Middle East and North Africa remains diverse, with the UAE leading the way in the region. This year’s edition of the Global Competitiveness Report marks an important milestone, as the report series has now been published for 40 years.
The 2018 report ranked 140 economies according to 12 pillars that were weighted equally. These pillars included institutions, infrastructure, ICT adoption, macroeconomic stability, health, skills, product market, labor market, financial system, market size, business dynamism and innovation capability.