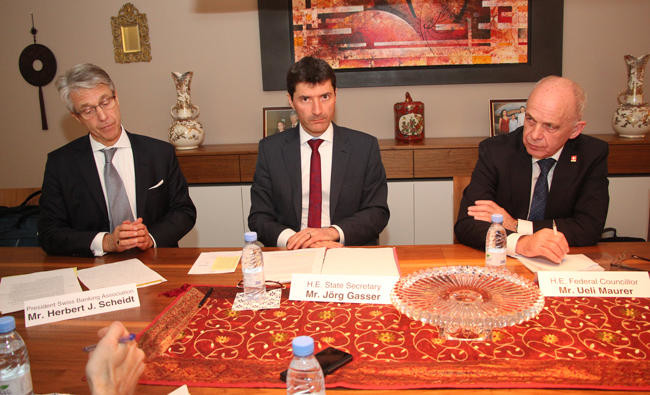 RIYADH: Switzerland has assured the Kingdom that the two countries can work closely together in the financial sector by holding regular meetings and that it will provide all necessary assistance to Saudi financial regulators and bankers.
The assurances were given by Ueli Maurer, Swiss vice president and finance minister, at a press briefing on Sunday night.
Maurer, who held wide-ranging talks with King Salman, said: “Switzerland and Saudi Arabia have agreed to hold a periodic financial dialogue at both political and technical levels. We have discussed Swiss training options for Saudi personnel working in the financial and banking sector.” He also referred to an agreement on double taxation signed by the two sides on Sunday.
The press briefing at the Swiss ambassador’s house was attended by Herbert J. Scheidt, chairman of SwissBanking (Swiss Bankers Association); Joerg Gasser, state secretary at the Swiss Federal Department of Finance (FDF); Peter Minder, FDF head of communications; and Heinrich Schellenberg, the Swiss ambassador.
The two-day visit of the delegation of Swiss bankers and regulators, as well as their intensive meetings with senior Saudi officials, are important bearing in mind the Kingdom’s high-profile corruption purge that has brought billions of dollars in settlements for the state.
Referring to his wide-ranging talks with Saudi Finance Minister Mohammed Al-Jadaan, Economy and Planning Minister Mohammed Al-Tuwaijri and Dr. Ahmed A. Al-Khulaifi, governor of the Saudi Arabian Monetary Authority (SAMA), Maurer said: “The talks focused on frameworks for investments and financial services, as well as local opportunities for Swiss financial institutions.”
He said that Swiss financial institutions had a strong presence in several Middle Eastern countries, including Saudi Arabia.
“Switzerland, which is the second largest financial market in Europe, currently has a total of SR26,600 billion ($7,093 billion) deposits in its banks, whose total number exceeds 261,” said SwissBanking Chairman Scheidt. He pointed out that “about half of these funds under management of the Swiss banks are from international clients.”
He added: “The Swiss banks can also play an advisory role as Saudi Arabia looks for better investment options within the framework of Saudi Vision 2030.”
According to the Swiss Bankers Association, the financial sector remains one of the key sectors of the Swiss economy, even in a challenging environment.