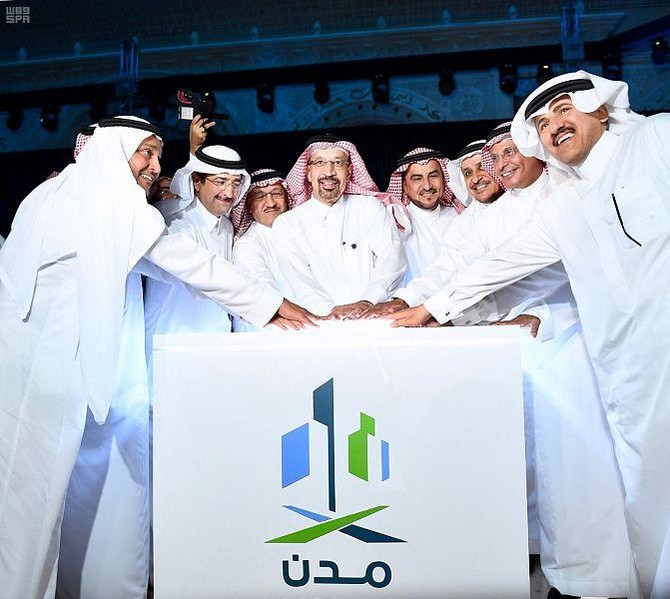 JEDDAH: Saudi Arabia has invested SR500 billion ($133.3 billion) in industrial, service and logistics projects and contracts, which will go a long way in cutting dependence on oil, and in diversifying the national economy.
The Kingdom is also witnessing a remarkable demand in industrial investment after intensified efforts by the Saudi Industrial Property Authority (MODON) and other government agencies.
“MODON’s success in marketing, highlighting advantages and incentives have attracted leading international companies in the industrial field,” said Saudi Energy Minister Khalid Al-Falih in Riyadh on Sunday.
Al-Falih was speaking before launching the new identity and strategy of MODON at the Ritz Carlton Hotel. Khalid bin Mohammed Al-Salim, MODON’s general director, was also present.
Al-Falih said the new strategy and identity of MODON is in line with the directives of King Salman, and Crown Prince Mohammed bin Salman. MODON’s new strategy and identity represents an important step and initiative toward the enhancement of its responsibility as one of the national industry’s pillars of empowerment and as a supporter of the state’s continuous plans to improve the industrial sector and to diversify national income resources, Al-Falih said.
“It enables the Kingdom to provide employment opportunities for young Saudis,” he added.
To this end, it is important to note that more than SR500 billion has been invested in 6,271 industrial, service and logistics projects and contracts in the Kingdom so far. “MODON has established 35 industrial cities with total industrial land exceeding 196 million square meters today,” said a press statement from MODON.
According to the statement, the existing industrial cities include 3,380 productive factories and 6,271 industrial, service and logistics contracts with a total workforce that exceeds 500,000 employees.
Al-Salim said: “The new identity of MODON represents all the values that it aspires to achieve and its constant efforts to provide the best and latest services. Saudi Arabia is witnessing rapid developmental changes in various sectors, especially in economic aspects, based on its orientation to implement the objectives of the National Transition Program 2020 and realizing Vision 2030.”
Al-Salim concluded his speech by thanking all MODON staff for their dedication. Since its inauguration in 2001, MODON has established industrial cities in various regions of the Kingdom.