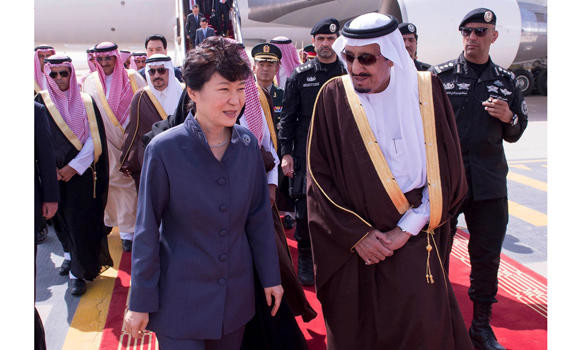 Saudi Arabia and South Korea signed five key accords on Tuesday in Riyadh including a plan to study the feasibility of building nuclear reactors worth SR7.5 billion across the country.
Custodian of the Two Holy Mosques King Salman and South Korean President Park Geun-hye also held wide-ranging talks here on economic and security issues. This is the first visit by a South Korean president since 2012.
The two countries, under the provisions of the signed MoU, are set to conduct a three-year preliminary study, to be completed in 2018, on the feasibility of constructing the nuclear reactors in Saudi Arabia.
Jungho Lee, a spokesman of the South Korean Embassy, said the framework agreement would include technical cooperation, research and development, and the exchange of personnel.
According to reports, the agreement would be reached between King Abdullah City for Atomic and Renewable Energy (KACARE) and South Korea’s science, ICT and future planning ministry.
Saudi Arabia is the biggest petroleum exporter and dependent on oil and gas for its electricity production. The late King Abdullah established KACARE in 2010 to develop alternate energy, including atomic power.
Lee said the talks between King Salman and Park looked largely at economic, and science and technology cooperation. It was an “opportunity to take bilateral ties to a new level,” he said.
“The Republic of Korea became the first foreign country with which the Kingdom signed such key accords after King Salman ascended to the throne, and it is a real honor,” said Lee.
King Salman also hosted a lunch for Park, while Crown Prince Muqrin, deputy premier; and Deputy Crown Prince Mohammed bin Naif, second deputy premier and minister of interior, called on Park separately on Tuesday.
Lee said the Korean president, who is accompanied by over 100 top businesspeople, would attend a Saudi-Korean business conference here on Wednesday.
He said the two sides also touched on security issues and challenges facing the Middle East. An MoU was also signed between the Korean Ministry of Science and King Abdulaziz City for Science and Technology.
The two other draft agreements signed at separate venues include one between the Export and Import Bank of Korea and Saudi Electricity Company, for financing a large project, and another between Kingdom Holdings Company and Korea Investment Corporation on investment collaboration.
Present at the talks and the signing ceremonies were several other members of the royal family and ministers including Prince Abdulaziz bin Abdullah, deputy foreign minister, and Prince Mohammed bin Salman, minister of defense. On behalf of Korea, top officials included Yun Byung-se, foreign minister; Choi Yang-hee, minister of science and future planning; Yoon Sang-jick, minister of trade and energy; and Moon Hyung-pyo, minister of health
Park will meet members of the Korean community here on Wednesday. She will also visit the historic Masmak Fort in Riyadh, which was built in 1865. She arrived on Tuesday afternoon in Riyadh on the second leg of her nine-day, four-nation tour of the Middle East, which took her to Kuwait first. She will also visit the UAE and Qatar.