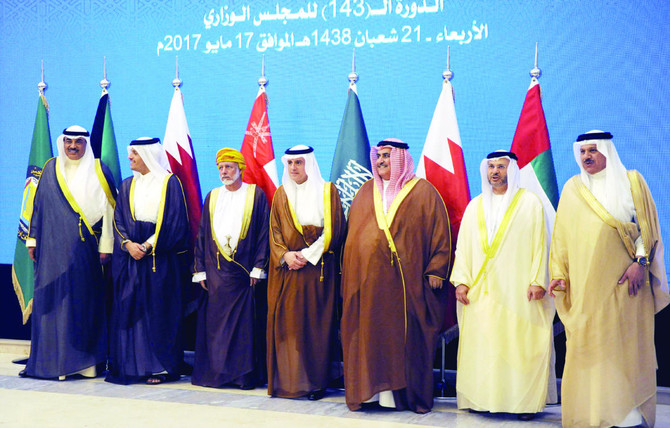 RIYADH: Relations between the US and the Gulf Cooperation Council (GCC) member states have strengthened over several decades, bound by mutual interests, interdependence and stable institutions.
The US-GCC Summit is expected to build on these ties, especially regarding security and commerce.
“The relationship between the Gulf and America, hitherto quite strong, will enter unchartered territory with the visit of (President Donald) Trump and his consultations with Gulf leaders in Riyadh on Sunday,” Ibrahim Al-Qayid, founding member of the National Society for Human Rights (NSHR), said Saturday.
“People in the Kingdom and across the Gulf, including top GCC officials, are hopeful that Trump’s contributions to restore peace and security in the Arab world will be unmatched by his predecessors. We’ll see as how the GCC-US alliance will evolve during the Trump presidency.”
Bahrain’s Foreign Minister Khalid bin Ahmed Al-Khalifa, who chaired the GCC ministerial meeting in Riyadh last Wednesday, said the US-GCC summit “is an indication of the significant role of the GCC countries in light of their responsible positions and continuous efforts to confront challenges and threats to the region and the world.”
PR strategist Nabil Al-Otaibi said although relations between the US and GCC “go back more than 70 years… they were largely sidelined by the Obama administration.”
He added: “Arabs in general and the Saudis in particular felt betrayed by the Obama administration.”
Shoura Council member Mona Al-Mushait said: “Trump’s meeting with GCC leaders will be a very important step (toward) the goal of fighting terrorism and bringing safety, opportunity and stability in the Middle East.”
She added: “Trump’s meetings with senior GCC officials are significant for our national security and global stability as they’re expected to discuss measures in confronting Iranian aggression.”