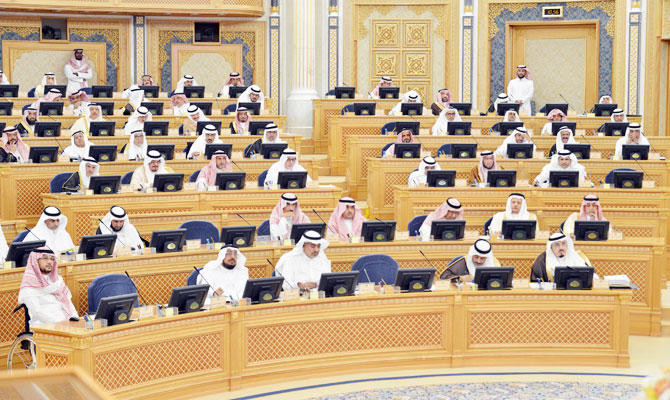 RIYADH: King Salman on Monday will deliver his inaugural address at the Shoura Council, where he will talk about a range of local and regional issues and urge lawmakers to support the government in taking the country forward.
The king’s speech, which will serve as a guideline for Shoura members, will begin the deliberations of the new parliamentary year of the 150-member council.
“The king’s visit to the Shoura is of utmost importance, and his speech will define domestic, regional and foreign policies,” said Hoda Al-Helaissi, a member of the Shoura Council here on Wednesday.
“With the visit of King Salman to the Shoura Council to mark the beginning of the third year of the seventh term, we take a moment to reflect on the past year,” Al-Helaissi said.
She said that “the past year has been a year of challenges and opportunities both within the Kingdom and abroad.”
“Remarkably, as is in our nature, and as exemplified by our leadership, we have remained steadfast in our values and beliefs, committed as a country to the well-being of our citizens, not least as explained in what has now become known as Saudi Arabia’s road-map for the future, Vision 2030,” Al-Helaissi said.
“As the home of the Two Holy Mosques and as an important strategic player in the region, Saudi Arabia has an important role in global politics and we look forward to hearing the king’s speech this coming Monday,” Al-Helaissi said.
Guidelines for addressing local and regional challenges with a special reference to domestic and foreign policies will be spelled out by King Salman, she said.
“Elaborate preparations have been made to receive the king on this occasion,” said Mohammed Al-Khunaizi, another member of the Shoura Council. Al-Khunaizi said that King Salman’s speech will have “added political and economic significance, and it will lay out the agenda for the rest of the Shoura’s term.”
“The occasion marks the beginning of the new year for the council,” said Al-Khunaizi, while forecasting a number of proposals, decisions, draft legislation, treaties and foreign policy matters to be discussed and debated in 2019.
He said that the king’s speech may touch on subjects such as society, security, peace, stability, extremism, economy, financial reforms, regional challenges and foreign policy matters.
Al-Khunaizi noted that the role of women members of the Shoura Council had lent new dimension to the debate and deliberations of the council. He said that the current Shoura Council is composed of 150 members including 30 women members.