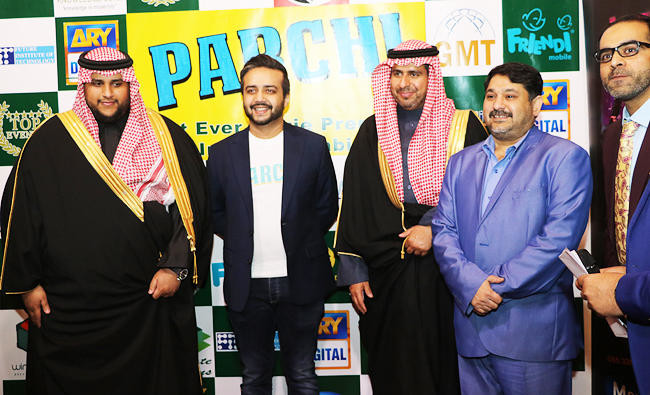 RIYADH: In a bid to promote Saudi-Pakistani relations in the film and entertainment industry, the premiere showing of the Pakistani movie “Parchi” was organized at a makeshift cinema hall here on Saturday night.
Guests from the film fraternity of the two countries and diplomats attended the event.
Prince Abdul Aziz bin Matab Al-Saud, chief of Top Events, welcomed the producer of the Pakistani flick, Imran Raza Kazmi, and other guests.
Kazmi said: “The show brought together film industry leaders of the two countries, paving the way for a possible production of Pakistani films and dramas in Saudi Arabia.”
Kazmi, who specially flew to Riyadh to attend the premiere show, also announced plans to work closely with the Top Events and the General Entertainment Authority (GEA).
“We are already talking to the GEA on cooperation modules in film, drama and entertainment sectors,” said Imran Ismael of Top Events.
Asked about the prospects of cooperation in the film and entertainment sector, Kazmi said he plans to visit the Kingdom with a group of filmmakers and artists to talk to the Saudi agencies for collaboration and to identify shooting locations across the Kingdom later this year.
“I am overwhelmed with the love and support given by Saudi brothers and Pakistani expatriates during this trip,” he added.
Malik Nadeem Sher, Riyadh-based bureau chief of a Pakistani TV channel, said: “I was really thrilled to watch the film with the producer of the film present at the show in Riyadh.” “It was really unbelievable…to watch the film, like I’m watching in a theater in Pakistan,” said Ghaffar Ahmed, who attended the first of the six shows.