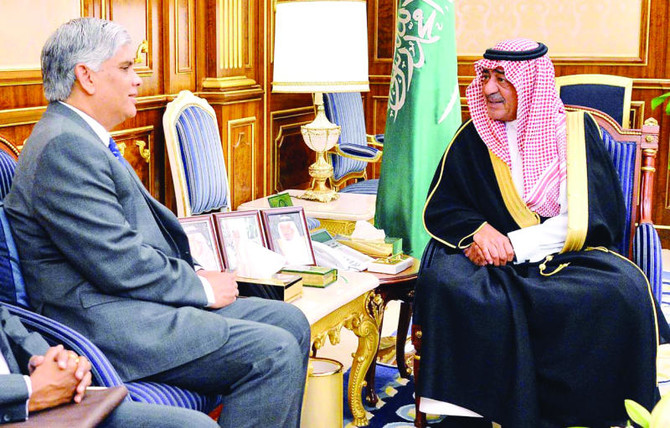 Crown Prince Muqrin, deputy premier, bade farewell to the outgoing Indian Ambassador Hamid Ali Rao on Monday, affirming the keen desire of the Kingdom and India to further accelerate cooperation in the fields of politics, trade, economy and culture.
In his audience with the crown prince, Rao thanked the Saudi government for the evacuation of a large number of Indians who were caught up in Yemen recently.
Rao, who will leave Riyadh later this week after completing about three and a half years of his diplomatic mission in Saudi Arabia, discussed different aspects of Indo-Saudi relations with Crown Prince Muqrin.
For Rao, the Saudi stint was a memorable experience. He spent his time in promoting people-to-people ties between the Kingdom and India, and in facilitating the exchange of high-level visits as well as development of trade and business between the two countries.
“It was a beautiful experience (being in the Kingdom),” said Rao.
Rao received many kudos for his swift handling of the Indian expat issues during the 2013 amnesty. He and his team managed to legalize the status of a large number of Indian workers.
“More than 1.4 million Indians availed themselves of the concessions during the grace period in 2013,” said Rao.
“It is very difficult to describe in words how much it has enriched my experience while working in Saudi Arabia,” said Rao.
“I have made many friends among Saudis, Indians and among Riyadh-based foreign diplomats,” he said. “I am happy that I was in a position to be able to contribute qualitatively to enhance Indian-Saudi relations.”
He pointed out that Indo-Saudi relations have been growing very fast. The realm of the bilateral relation has expanded and it today includes areas like economic, political, defense, security, manpower and many more areas of mutual concerns, he said.
On the commercial front, he said Indo-Saudi economic relations have shown remarkable growth with bilateral trade registering a threefold increase in the last five years. Saudi Arabia is the fourth largest trade partner of India today.