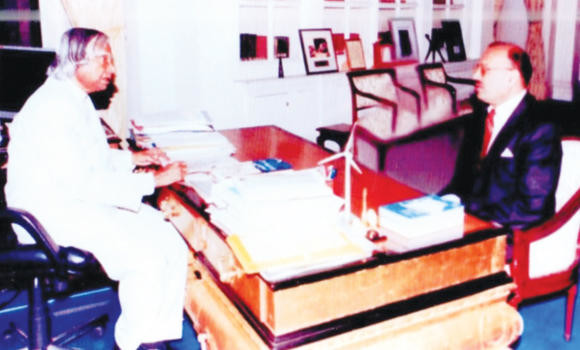 RIYADH: “To say he was the former Indian president, or the first scientist to occupy Rashtrapati Bhavan, and a man with an inspiring life story would have all been true. But they would ultimately be incomplete descriptions of the enduring appeal of late APJ Abdul Kalam,” said a long-time Riyadh resident Syed Ahmed Ziauddin, who had the privilege of meeting Kalam in New Delhi way back in 2006.
Recalling his meeting with late President Kalam, Ziauddin said that “he was a rare president whose high office actually brought him closer to the ordinary people rather than shutting him off from them.” At the very outset, Ziauddin recalled Kalam’s meeting with Custodian of the Two Holy Mosques King Abdullah in January 2006, when the late king was the chief guest of Republic Day celebrations in New Delhi.
“That was the first visit of a Saudi king to India in more than 50 years and the way the late President Kalam and the then Prime Minister Manmohan Singh accorded reception to the late King Abdullah has no parallel in Indian history,” said Ziauddin, a senior banker, who currently heads the financial institutions and public sector group at Bank Aljazirah.
He pointed out that he was given a 10-minute appointment by President Kalam but the meeting lasted for more than 40 minutes.
Ziauddin, a seasoned international banker with 35 years of diverse domestic and international banking experience, said that the late president expressed his wish to visit Saudi Arabia for Umrah or Haj during my talks with him.
“The late Kalam, one of India’s most distinguished scientists and an architect of the country’s missile program, also talked about banking and trade relations of India,” he added. My discussions with him also focused on the progress made by India, and his vision for a new and modern India.
Ziauddin, said:“I still remember the humble soul, who never bothered about protocol, while meeting and interacting with people from all walks of life, including me.”
“His simplicity cannot be explained in words,” said Ziauddin, who is also the president of the NRIs Gulf Forum (Saudi chapter). He further said that “I was privileged to meet President Abdul Kalam. In the time I spent with him, I was struck most of all by his simplicity, and almost childlike curiosity. He was an extremely alert, versatile genius and a great conversationalist.”
“As I sat near him in his office, I remember thinking to myself, ‘What a remarkable life story; what a remarkable Indian,’” he recalled. “I had a special bond with the late president; he was one of India’s favorite sons and one of my ideals,” said the banker. “We have lost a remarkable Indian; while born a Muslim, he truly embraced the spirit of being Indian. He will be missed, but his ideas will live on as India takes its rightful place in the world,” he observed.