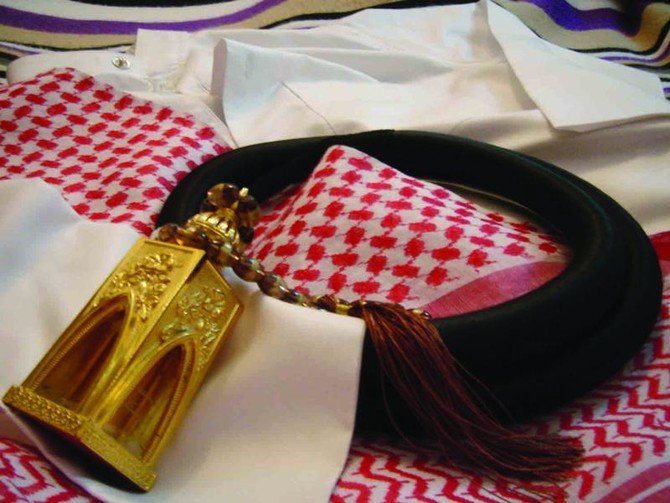 Countries in the Middle East may be changing in terms of technology and development. However, when it comes to making a fashion statement, these countries including Saudi Arabia allude back to traditional and cultural trends, which are increasingly becoming popular today. Saudis and Arabs are proud and hospitable people, and they take due pride in maintaining their historical dress code.
The traditional Saudi headdress is popularly known as ghutra. Western and Asian visitors to the Kingdom can see hordes of Saudi men and children wearing the ghutra and igal. Many believe that it is worn to keep away the heat from the scorching desert sun, while others argue that it is an age-old tradition that is very popular among Saudis and Arabs.
One important component of wearing the ghutra is securing it on the head. It is often seen that even when a Saudi man walks fast his ghutra never falls off. It is the igal, the black rope-like cord, that holds the ghutra in place.
These and many other questions are raised about ghutra and they warrant some background explanation. Not many people are aware that the present day favorite in the Kingdom — the red and white-checkered ghutra — has its roots in far away Europe. Some may not agree to it. It is believed that it was introduced in ancient Arabia, while others say it arrived in Saudi Arabia only a few decades ago.
Many Saudi men, even children, wear a white ghutra with ‘Takeyah’ (also called ‘Kufyah’), worn on the head underneath the ghutra, and the black igal. The ghutra is a squared cloth normally folded into a triangle. In olden days, even before the advent of Islam, covering the head in old Arabia was part of a man’s routine.
The first known pictures of Arabia showed men wearing a piece of colored cloth with a band holding it on top of their heads. There were no stylish white or red headgears then. “It is now a sort of a fashion statement,” said Kareem Al-Otaibi, a local cloth merchant.
Some of the photographs taken about 50 years ago show men wearing a white ghutra. “I never saw my father or any one from his generation wearing the checkered red and white ghutra,” said Saleh Al-Otaibi, an elderly Saudi man. In other words, the red and white ghutra was not introduced until about 50 years ago. The new colors and designs of ghutra came to the market only a few years ago, he added.
It must be noted here that Arabs and Saudis have a distinct headgear for men and women. Arab men have a good variety of headgears to choose from. Their traditional headwear options include ‘Kalansuwa,’ ‘Turbans,’ ‘Imamah’ and ‘Keffiyeh.’ They vary from one Arab nation to another in the region.
Today, a majority of the Arab men wear keffiyeh, also called shemagh. It is basically a traditional square cotton scarf which is placed on the head and secured with an igal. Different tribes, countries and even neighborhoods have their own traditional colors for the keffiyeh.
In the UAE, the most prevalent color of the keffiyeh is white, which is worn with a black igal. The simplicity of the keffiyeh has made it an international trend even in cities such as Tokyo and Paris. It has become a popular global headgear.
Man foreign visitors to Arab countries buy these headdresses as souvenirs to carry with them to their home countries.
A Saudi man’s headdress consists of a small white cap that keeps the ghutra tight.
In Saudi Arabia, the ghutra is available in all kinds of shapes and sizes. If you are looking for a ghutra for everyday use, you should opt for one in cotton. However, soft and flexible headgears are mostly made of wool. Other materials used are acrylic and nylon.
Ghutra prices in the Kingdom range from SR10 to SR100, depending upon their quality. The most popular brands include Nike, Mitchell & Ness, New Era, Starter and Jack & Jones.
—