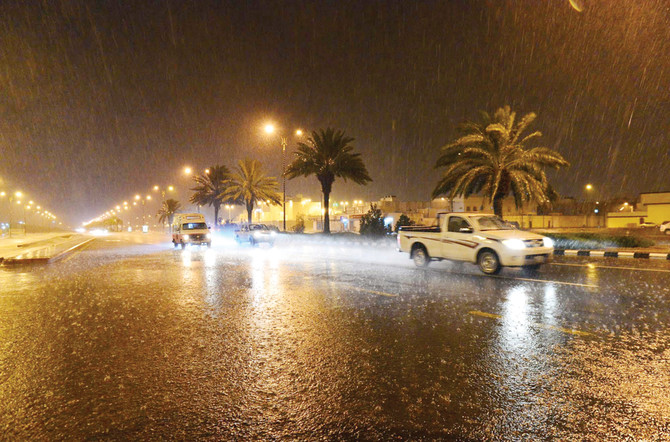 RIYADH: The General Directorate of Civil Defense has urged citizens and expatriates to take utmost precautions in view of the warning about the continued inclement weather, heavy rain and flash floods that are expected to hit different regions of the Kingdom.

Intermittent rains have been lashing the capital city since the early hours of Thursday while weather experts have predicted more rain for the next few days.

Prof. Mansour Almazroui, director of the Center of Excellence for Climate Change Research at the Jeddah-based King Abdul Aziz University (KAU) told Arab News that light to heavy rains would continue to occur in the Kingdom including the capital city.

He said the Kingdom has never received such heavy rains in the month of November. “It could be considered the wettest November in the country’s history,” Almazroui said.

He said the current rainfall system is likely to prevail over Saudi Arabia until Nov. 26, 2018, and is expected to unleash rain and thunderstorms in some places of central, northeastern, eastern and some southwestern parts of the Kingdom including Kuwait, Bahrain and the UAE.

He said: “There are chances of moderate to heavy rain and thundershowers in some places in eastern and southwestern parts of Saudi Arabia during the next two days.”

The KAU professor said another rainfall system is likely to approach northern/northeastern parts of Saudi Arabia by the end of November, which may cause rain and thunderstorm in some places.

The Civil Defense urged the masses “to take the highest degree of caution and safety during rainfall and to avoid visiting places prone to flash floods.”

Picnickers and desert travelers have been warned to stay away from valleys and reefs during heavy rain or flash floods, and not to risk crossing flood passages or intersections. Heavy rainfall already took several lives early this month, when different regions of the Kingdom were hit by severe weather conditions.