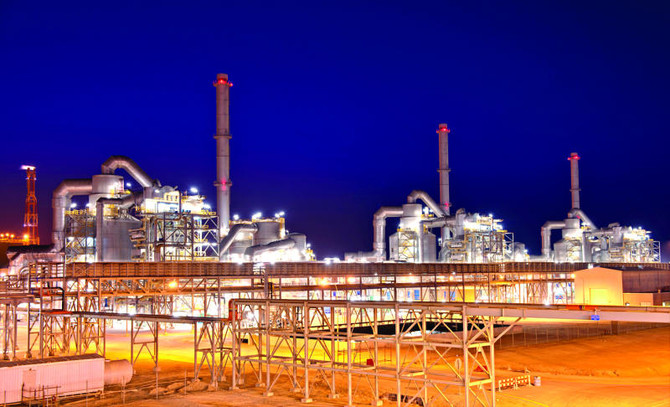 RIYADH: Mining giant Saudi Arabian Mining Company (Maaden) has been rated as one of the best world-class companies on various operational, projects, training and skill development and financial parameters with its asset base recording 14-fold increase; now exceeding $22.5 billion in total.
Maaden has also grown its revenues significantly from $65 million to $ 2.9 billion last year since the company’s initial public offering back in 2008.
This was disclosed in a report released by Maaden exclusively for Arab News.
When Maaden was first formed in 1997, it was a small enterprise operating one gold mine and very little elsewhere in the Kingdom in mining sector.
“Since then, the company has opened five new gold mines, with four more on the way; and completed one of the world’s largest fully integrated aluminum projects;” said the report.
Maaden has also laid the path to become one of the top three global phosphate producers; and has delivered its product to over two dozen countries around the world.
While building industrial cities, creating jobs and enabling communities to prosper across the Kingdom, Maaden has reached significant milestones that now place the Saudi mining sector firmly on the global map.
In a speech accepting the “2014 Best Corporate Governance in Saudi Arabia Award” Maaden President and CEO Khalid Al-Mudaifer summarized Maaden’s journey very well, when he said: “Maaden continues to champion the responsible development of the mining sector in Saudi Arabia while serving the best interests of our shareholders, management, employees, customers and the communities in which we operate.”
These accomplishments are clearly reflected in Maaden’s recent financial results.
Since the company’s initial public offering back in 2008, Maaden has grown its revenues significantly from $65 million to $2.9 billion last year. And after leading tremendous new investment in the sector, Maaden has recorded a 14-fold increase in its asset base, now reaching over $22.5 billion.
Today, Maaden is not only the largest multi-commodity mining and metals company in the Middle East, but in recent years it has delivered one of the fastest growth rates of any mining company of the globe.
It has proved that Saudi Arabia’s wealth can also be found beyond oil or petrochemicals, in a new “third industrial pillar” of mining.
To facilitate this tremendous growth, since it’s IPO Maaden has accessed an astonishing $23 billion in debt and equity financing from many domestic and global financing institutions.
To help deliver the Kingdom’s mining potential, Maaden has established joint ventures with companies that are global leaders in their sectors — Sabic in petrochemicals, Alcoa in aluminum, Mosaic in phosphate and Barrick in precious and base metals. Each of these partners brings leading edge expertise and technology to the Saudi mining sector, as well as global marketing capabilities.
Together with its joint venture partners and the government, Maaden built a large scale, multi commodity industrial city at Ras Al-Khair; which has already added nearly $10 billion to the Kingdom’s GDP and created approximately 28,000 new jobs. All of this from an area that less than ten years ago was nothing but sand.
The Ras Al-Khair complex includes the Maaden Phosphate Company, a $5.6 billion joint venture with Sabic that allows Maaden to export high-quality fertilizer to more than a dozen countries and will help to make Saudi Arabia a global top-3 phosphate producer.
Also at Ras Al-Khair, Maaden has invested $10.8 billion with its partner Alcoa to build an integrated aluminum operation which uses a dedicated rail line to bring bauxite mined 600 km from Al-Baitha to the Middle East’s first alumina refinery, a state-of-the-art smelter, the world’s most technologically advanced rolling mill, and the Gulf’s only aluminum recycling facility.
The result is high-quality Saudi aluminum, for use in anything from car components and construction materials, to beverage cans — now being delivered to customers both in the Kingdom and globally.
Based on the scale and success of Ras Al Khair, Maaden is now developing a second, equally ambitious industrial city in the remote north of the Kingdom at Wa’ad Al Shamal.
Covering 440 square kilometers, Wa’ad Al Shamal City is the largest ever industrial development attempted in the interior of Saudi Arabia.
Its first project is a $7.5 billion joint venture with Sabic and Mosaic Corporation in which Maaden will develop the large phosphate resources at Umm Wual through seven world class plants and associated facilities, supplying phosphoric acid to the fertilizer, food and animal feed industries.
In addition to aluminum and phosphate, Maaden continues to apply modern exploration techniques across the Kingdom in order to grow its gold production to 500,000 ounces per year in 2017.
In the strategic Central Arabian Gold Region, increased production is made possible by a 450-km pipeline recently completed by Maaden, which delivers treated wastewater to its new mines.
By using wastewater in its production process, Maaden is conserving local groundwater — a precious resource for local communities in remote desert locations.
Although it has already delivered some tremendous results, Maaden has its eyes focused firmly on the future.
Through expansion projects and further diversification of its minerals businesses, Maaden plans to continue its growth but to do so it must deal with some very real challenges.
Because mining is a new industry in the Kingdom, Maaden is facing a lack of trained workforce, particularly in remote regions where it tends to operate.
To meet this challenge, Maaden and its partners have established the Saudi Mining Polytechnic in Arar, the first institute in the Kingdom to offer academic and on-the-job training for up to 500 students per year to become fully qualified miners and operators.
This is part of Maaden’s strategy to focus on communities by hiring locally and spending locally.
Nearly two thirds of Maaden’s mine employees come from surrounding towns and villages, while Saudization of its entire workforce has reached 65 percent in total.
Developing local small and medium sized businesses near its facilities is a key focus at Maaden; and last year 78 percent of the company’s purchasing budget was spent on local Saudi goods and services.