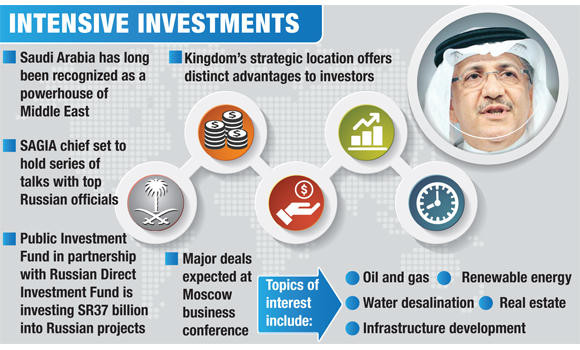 RIYADH: Abdullatif Al-Othman, governor of the Saudi Arabian General Investment Authority (SAGIA), will travel to Russia with a huge business delegation Tuesday.
It clearly indicates that Saudi Arabia is moving to engage with Russia more intensively in both political and economic domains. Al-Othman will cochair the high-profile business conference and exhibition in Moscow during this trip.
Asserting that Saudi-Russian ties are poised to “scale new heights,” Al-Othman said in a brief statement that the Kingdom’s relationship with Russia was a “key element in its bilateral engagement as the country moves forward to forge closer ties.” “In fact, Riyadh and Moscow have evinced keen interest to boost bilateral links in all sectors,” he added.
The SAGIA chief, during his stay in Russia, will also hold talks with top Russian officials. Several joint workshops will be organized on this occasion to focus on potential areas of cooperation. Topics of workshops include joint cooperation in mineral exploration, transport, infrastructure development, agriculture, oil & gas, housing, real estate, tourism, electricity, renewable energy, water desalination and health care.
A framework agreement to set up “Russian-Saudi Joint Committee” is also likely to be signed on the sidelines of the business conference. All these initiatives that would be launched during the visit will further promote the unified investment plan prepared by SAGIA that identifies about 100 investment opportunities in 18 sectors with a cumulative value of SR1.3 trillion.
To this end, it is important to note that the Public Investment Fund of Saudi Arabia in partnership with the Russian Direct Investment Fund has agreed to invest SR37 billion into Russian projects. It is the largest foreign investment in Russia. A final agreement in this regard was announced early this year. These funds are expected to be implemented within 4 to 5 years, said a report.
Referring to the objectives of the SAGIA delegation, a SAGIA statement said “the delegation members will meet with key Russian counterparts to explore the growing investment potentials between the two countries.”
Russia has wide prospects for the development of cooperation with Saudi Arabia.
A task–oriented and balanced policy is required in order to implement all the opportunities the two countries offer.