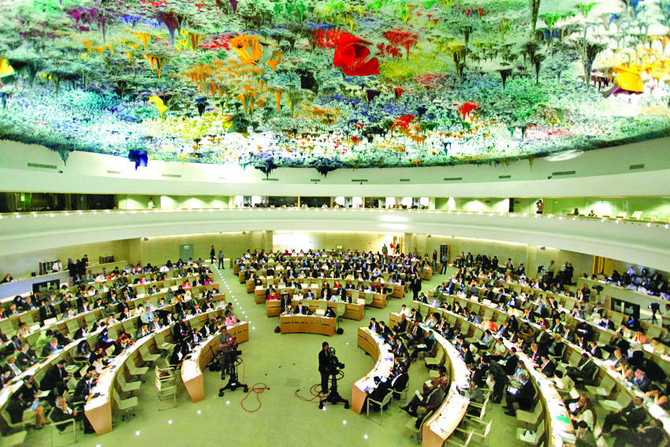 RIYADH: Saudi Arabia, which was re-elected to the UN Human Rights Council in October, began its three-year term at the council Sunday amid instability and turmoil in the Middle East. The Kingdom’s UNHRC term will end on Dec. 31, 2019.
Saudi Arabia, together with 13 new member nations who were elected to the UNHCR, will be responsible for the promotion and protection of human rights and will be entrusted with the task to deal with human rights issues across the globe.
“It’s time to celebrate for our country led by Custodian of the Two Holy Mosques King Salman,” said Ibrahim Al-Qayid, founding member of the National Society of Human Rights (NSHR), here Tuesday.
Al-Qayid said that “joining the UNHCR for a second term indicates the growing stature of the Kingdom on the one hand and the trust of the international community in the Saudi leadership on the other.” He said Saudi Arabia was re-elected for an additional term with China, Cuba, South Africa and the United Kingdom. “All would serve three-year terms beginning Jan. 1,” he added.
It’s also a coincidence that three Gulf states — Saudi Arabia, Qatar and the UAE — will remain members of the Council during the current session. The membership of Qatar will end on Dec 31, 2017, while the UAE’s membership will cease on Dec 31, 2018. The newly elected member states of the Geneva-based body are Brazil, Croatia, Egypt, Hungary, Iraq, Japan, Rwanda, Tunisia and the US.
The new members are four from Africa; four from Asia-Pacific including Saudi Arabia; two seats for Eastern European states; two seats from Latin American and Caribbean States; and two for Western European and other states.
Abdullah Al-Mouallimi, the Kingdom’s permanent representative to the UN, said that the re-election “reflects the international community’s trust in the pioneering and leading role played by the Kingdom.” Al-Mouallimi said that the positive development will allow the Kingdom to complete its mission in defending the human rights in the Arab and Islamic worlds.
Referring to the agenda of the UNHRC, a political science professor of King Saud University (KSU), said that “the council has a long list of issues to deal with ranging from the administration of justice, child rights, rights of persons with disabilities, rights and resettlement of refugees.” The council, he said, monitors human rights conditions across the world, engages in discussions and puts pressure on nations that violate human rights.
The council has the ability to set up special procedure mandates and inquiry panels to investigate and report on human rights abuses and issues recommendations to address violations. The council can also issue resolutions calling on nations to take specific actions or to uphold certain principles in additions to its other powers, rights and duties.
Created by the UN General Assembly in 2006, the 47-member council is an intergovernmental body within the UN system. All of its members are elected by the world body’s General Assembly, and it has the ability to discuss all thematic human rights issues and situations that require its attention throughout the year. It meets at the UN office at Geneva.