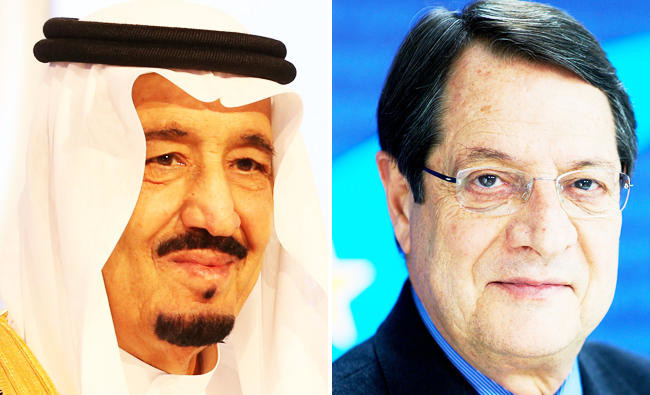 RIYADH: Key regional issues that have tossed the entire Middle East into turmoil, with a special reference to Saudi-Cypriot relations, will top the agenda of wide-ranging talks between King Salman and Cyprus President Nicos Anastasiades here on Wednesday.
Anastasiades, who will arrive in the Saudi capital on Tuesday, is the first Cypriot president to visit the Kingdom.
“The talks will focus on a range of important regional and international issues of common concerns, and explore ways to enhance bilateral relations between Riyadh and Nicosia,” said Nikos Panayi, ambassador of the Republic of Cyprus, here on Sunday.
Calling the visit of the Cypriot president “historic,” Panayi said the president will also “elaborate on the Cyprus issue during his talks with Saudi officials.”
He pointed out that “a major memorandum of understanding (MoU) will be signed between the two countries for holding periodic political consultations.” The MoU will make provision for regular consultations between the foreign ministries of the Kingdom and Cyprus, which will boost political cooperation and coordination as well as mutual support wherever possible.
This is in addition to an agreement on avoidance of double taxation to be signed by the two sides during Anastasiades’ visit, the envoy added.
He said the Cypriot president will be accompanied by high-ranking officials including Minister of Foreign Affairs Ioannis Kasoulides, Defense Minister Christoforos Fokaides, Minister of Transport, Communications and Works Marios Demetriades and Minister of Energy, Commerce and Industry Georgios Lakkotrypis.
The envoy added the ministers will have separate meetings with their Saudi counterparts on the sidelines of the presidential visit. The Kingdom and Cyprus have had cordial ties, he said.
Nicosia condemned the missile strikes on the Kingdom from Yemen.
Moreover, Cyprus also remains a destination with great potential for investments and trade. The potential emanating from the discovery of hydrocarbons in Cyprus’ exclusive economic zone has opened new opportunities and enhanced the role that Cyprus seeks to play in its greater neighbourhood.