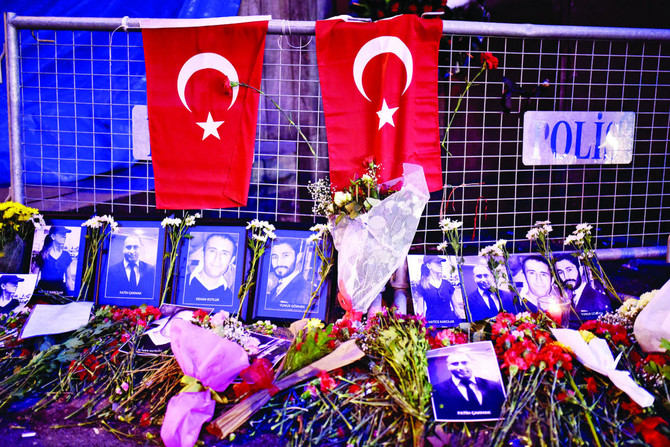 RIYADH: King Salman has condemned the terror attack in Turkey that killed at least 39 people at a night club, calling the shooting a “cowardly terrorist act.”
King Salman on Monday expressed his condolences to the families of those killed and to the dozens of wounded.
In a cable of condolences sent to Turkish President Recep Tayyip Erdogan, King Salman said: “We have received with deep sorrow the news of the armed attack in Istanbul, which resulted in deaths and injuries. We strongly condemn … and reaffirm the Kingdom’s standing and support to Turkey and its people against anyone, who tries to undermine its security and stability.”
The king expressed his grief over the killings and termed it “an act of terrorism.”
“On behalf of the government and the people of Saudi Arabia, I offer condolences to Your Excellency (President Erdogan), the brotherly people of Turkey and the families of the victims, wishing the injured a speedy recovery,” the king added.
In another cable of condolences sent to Erdogan, Deputy Crown Prince Mohammed bin Salman, minister of defense, condemned the attack and wished speedy recovery of those wounded. The deputy crown prince said: “We have received with deep sorrow the news of the armed attack in Istanbul, which resulted in deaths and injuries.”
Abdullah Al-Rashidan, vice consul at the Saudi consulate in Istanbul, said Monday that “a total of seven Saudi citizens, including four Saudi women, were killed in the shooting at the waterside Reina nightclub.”
He pointed out that 13 Saudi nationals, including six women, have been admitted to different hospitals in Istanbul, where they are currently being treated for injuries.
“The Saudi officials are closely working with Turkish side to repatriate the dead bodies of the Saudi victims to the Kingdom as early as possible,” the vice consul said.
He called on Saudi nationals, currently in Istanbul or in adjoining cities and towns, to call or approach the consulate, if they need any assistance or information.
An estimated 600 people were celebrating New Year inside the club in Istanbul when it was attacked. The club is often frequented by famous locals, including singers, actors and sports stars.
Turkey has faced numerous attacks linked to Daesh. A fortnight ago, Russian Ambassador to Turkey Andrey Karlov was assassinated in Ankara, the Turkish capital city. More than 400 Turks and foreigners have been killed in various terrorist attacks during the last 18 months.
The biggest single incident took place in October 2015, in Ankara, where 100 people were killed by two suicide bombers.
In another terror attack in August 2016, about 50 people attending a wedding ceremony in the southeastern city of Gaziantep were killed.