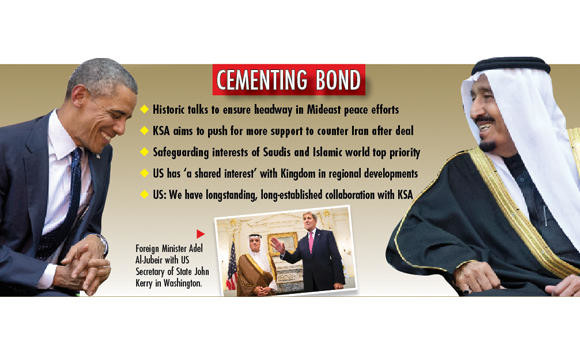 RIYADH: Custodian of the Two Holy Mosques King Salman is holding historic talks here with American President Barack Obama that would ensure significant headway in bringing peace to the troubled Middle East, the Royal Court said in a statement on Thursday.

King Salman and Obama would discuss a range of bilateral, regional and international issues, with the king aiming to push for more support to counter Iran after it agreed to a nuclear deal, the statement said.
Despite the Gulf Cooperation Council’s disappointment with Obama’s push for a nuclear deal with Iran and his lack of direct action in Syria, the role of the United States in Riyadh’s war in Yemen shows Washington remains the Kingdom’s core strategic partner.
The statement added that King Salman’s visit is part of his broader diplomatic initiative that calls for talks with world leaders “to safeguard the interests of the Saudi people and the Islamic world, and to reaffirm the bonds of friendship between the Kingdom and the United States.” Foreign Minister Adel Al-Jubeir and his counterpart John Kerry met in Washington on Wednesday to review preparations for the royal visit.
Commenting on the visit, Zuhair Al-Harthi, a member of the foreign affairs committee at the Shoura Council, said that “the summit talks between King Salman and Obama come at a time when the region is in political turmoil.” He said that Saudi Arabia “believes in direct dialogue and meetings and, therefore, the king’s visit and his meetings with leaders of that influential country will have deeper repercussions.”
Al-Harthi hoped that the leaders would find “solutions for pending problems, notably those related to Syria, Yemen, Iran, and terrorism.” He said the forthcoming summit would play a pivotal role in shoring up relations between the two countries to push Washington into re-shaping its policies and priorities, and therefore ensure security and stability in the Middle East.
Palestinian Ambassador to Riyadh Basim Al-Agha described the visit of King Salman and his upcoming meeting with Obama as “important in terms of timing and meaning.” He hoped that King Salman would discuss the Palestinian issue with the American leaders.

Ben Rhodes, United States deputy national security adviser, said that “this is an important visit at an important time with the many developments in the region; where we have a shared interest.”
“Even as we work together to tackle challenges in the region — security and stability — we also have, of course, a very longstanding, long-established collaboration across a whole range of issues, including education, commerce, health, energy and other issues,” said another White House official.
“And we expect the two leaders will discuss ways to continue to promote security in the region, coordinating more closely to address Iran’s destabilizing activities in the region, as well as the broader threat from extremism and terrorism in the region,” he said.
A transcript of the press call released by the United States embassy in Riyadh said that “the US is going to focus on discussing with Saudi Arabia and other Gulf partners how we can build more effective capabilities and cooperation to counter that Iranian activity.” To this end, the White House officials said that “we need to ensure that we’re doing everything we can to counter Iran’s destabilizing activities in the region.”
On other regional issues, Rhodes said that the leaders would have “a very significant set of discussions on conflicts such as Syria and Yemen where we would support and share many of the objectives that Saudi Arabia has.” “At the same time, we want to make sure that we’re pursuing both military and political strategies in both of those cases, and that we are both committing the humanitarian assistance necessary to deal with grave situations in again both Syria and Yemen,” he said.
On Iraq, Rhodes said that Saudi Arabia has significant relationships in Iraq that can be utilized to support the ongoing effort against Daesh. “We’ve been very focused, for instance, on Anbar Province and deepening our support with the community, including Sunni tribal communities.” He said “Saudi Arabia can be a constructive voice in encouraging cooperation across different Iraqi communities.”