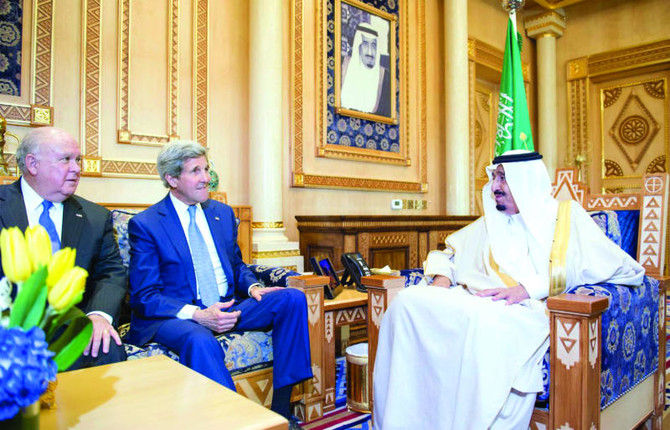 Iran’s belligerent policies, which are hampering all plans for restoring peace and security in the Middle East, came under fire during talks between US Secretary of State John Kerry and the foreign ministers of the GCC states on Thursday.
Kerry also called on Custodian of the Two Holy Mosques King Salman and discussed key regional issues, including the Iranian nuclear negotiations.
Kerry’s talks with King Salman mainly focused on bilateral and regional issues, including an emerging nuclear deal with Iran, Syria and Iran’s role in Iraq.
On the Iranian nuclear negotiations, Foreign Minister Prince Saud Al-Faisal categorically stated that Kerry had given full assurances that the US would continue to monitor Iran’s “destabilizing” actions and behavior.
Referring to the Iranian nuclear negotiations, Prince Saud said that the Kingdom extended support to the negotiations between Iran and P+5 bloc of countries. “But, the Kingdom also supports a strong international inspection to ensure that Iran is not seeking to manufacture or possess nuclear weapons,” said Prince Saud, while renewing his support for peaceful use of nuclear energy by Iran or any other country of the region.
He also reminded Kerry that the GCC leaders had voiced their concerns time and again about Tehran’s covert support to the Syrian regime. He accused Iran of meddling in the affairs of the Arab world, saying that “Tehran today promotes terrorism (and) it occupies lands ... these are not the features of a country that seeks to improve its relations with its neighbors.”
Prince Saud made these remarks, while addressing a joint press conference with Kerry at the Riyadh Airbase.
Calling his talks with Kerry “fruitful, constructive and transparent,” Prince Saud said that he discussed several regional issues with the US secretary of state, including Iran, Syria, Yemen, Libya and the Middle East peace process.
Kerry, who also met the GCC foreign ministers on Thursday, briefed them about the nuclear talks with Iran and discussed ways to bring peace and stability to Yemen.
Speaking alongside Kerry at the press conference, Prince Saud gave a detailed account of the problems posed by Iran. He said that the involvement of Iran in the push being made by Iraqi forces alongside militias to retake the Iraqi city of Tikrit from the Islamic State was a prime example of what worries Saudi Arabia and the Gulf states.
Prince Saud, in clear terms, said that “Iran was taking over Iraq.”
The foreign minister also called on the US-led coalition conducting airstrikes against the IS in Syria and Iraq to fight the militants on the ground. “Saudi Arabia, which is part of the coalition, stresses the need to provide military means and support required to face this challenge on the ground,” said Prince Saud.
He reiterated the Kingdom’s support to the legitimate government of Yemen led by President Abed Rabbo Mansour Hadi. “The Saudi support to Hadi is in line with the support and policies expressed by the GCC, the Arab League and the UN Security Council,” he said.
The foreign minister also expressed his strong concerns over the Middle East peace process, which is not making any headway.
Prince Saud renewed the call for an independent Palestinian state. The two leaders touched on the prospects of reviving peace negotiations between Israel and Palestinians. Prince Saud, however, lamented that all efforts to revive the negotiations are failing. “It is mainly because of Israel’s policy of stubbornness and procrastination,” said the prince.
Asked about the regional turmoil for which Syrian regime is greatly responsible, Kerry said: “Military pressure may be needed to oust Syria’s President Bashar Assad ... He has lost any semblance of legitimacy, but we have no higher priority than disrupting and defeating the IS and other terror networks.”
On the question of Iranian nuclear negotiations, Kerry said Washington was not seeking a “grand bargain” with Iran that would involve wider political and security cooperation with Iran, and insisted that a nuclear deal with Iran would address security concerns of Gulf countries.
Kerry’s visit to Saudi Arabia follows three days of talks this week with Iranian Foreign Minister Mohammad Javad Zarif in Switzerland aimed at persuading Iran to restrain its nuclear enrichment program.
On Yemen, Kerry stated that the US supports “the peace process led by the UN” and within the framework of the GCC initiative for Yemen. The UN-mediated talks, that have failed to progress substantially of late, are aimed at breaking the political stalemate between the Houthis and the legitimate faction led by Yemeni President Hadi, he added.
Kerry also conveyed to King Salman the greetings of US President Barack Obama. On his part, the king sent his greetings to the US president. The audience was attended by Prince Saud; Deputy Crown Prince Mohammed bin Naif and Defense Minister Prince Mohammed bin Salman.
On the American side, the talks were attended by US Ambassador to the Kingdom Joseph W. Westphal, Assistant Secretary of State for Near Eastern Affairs Anne Patterson, Chairman of Joint Chiefs of Staff Adm. Kurt Ted, US State Department spokeswoman Jennifer Psaki and other high-ranking American officials.