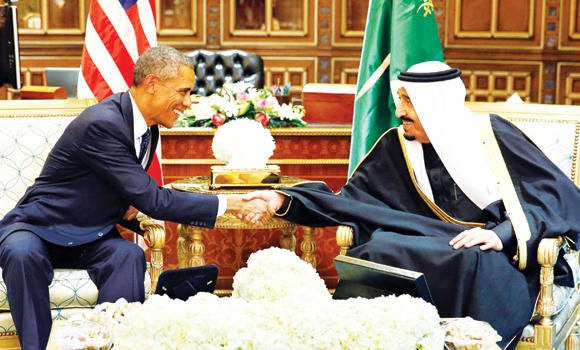 RIYADH: Key regional issues with serious global implications is expected to top the agenda of the wide-ranging talks between Custodian of the Two Holy Mosques King Salman and United States President Barack Obama in Washington on Friday.

The focus of the summit-level talks will be on Iran’s nuclear deal, international involvement in Syria, Yemen, terrorism and bilateral cooperation, officials and analysts have indicated. It will be King Salman’s first visit to the United States since ascending the throne in January this year.
“President Obama and King Salman will discuss a range of issues and focus on ways to further strengthen the bilateral relationship, including counter-terrorism efforts,” said White House spokesman Josh Earnest.
“The two leaders are likely to discuss Yemen, Syria and steps to counter Iran’s destabilizing activities in the region,” said Fahad Nazer, a political analyst. Similar views were expressed earlier by Foreign Minister Adel Al-Jubeir. Nazer said there are high hopes the visit would help resolve several challenges facing the Middle East.
Speaking on the phone from Washington, Abdullatif Al-Othman, Saudi Arabian General Investment Authority governor, said that a high-profile business and investment forum would be organized on the sidelines of the visit. The royal visit is expected to boost commercial links between the two nations.
The two sides are expected to try to find common ground on key regional issues. Given the decision to step up its support for the Syrian opposition, a discussion of American involvement in Syria is likely to top the agenda.
The Saudi leadership will also share concerns over Tehran’s posture vis-a-vis Syria and its support of President Bashar Assad. “The importance of Obama’s meeting with King Salman, however, goes well beyond the politics of the Iran deal as the two leaders may choose to discuss a range of other regional and bilateral subjects,” said a Saudi official, on condition of anonymity.
“But, these are tough times the strategic partnership ... is facing across the region in the realm of security and stability,” said Anthony Cordesman, Burke Chair in Strategy at the Center for Strategic and International Studies, in a report released Wednesday. “The meeting between President Obama and King Salman is unlikely to be an exception,” he noted.
Both nations are close strategic partners in spite of their differences, and both states need each other. At the same time, the US needs to reassure its allies and reinforce its commitment to the partnership, which it has had with the Kingdom and Gulf Cooperation Council as a bloc through the years.
At a more popular level, it is also all too clear that many officials in the GCC or in the extended neighborhood of the whole Middle East) do not trust the US commitment today, say observers.
Many also see the US as a nation that is not an effective leader and has no clear strategy for the region as a whole. But the two countries have also reported progressively growing trade and investment relations over the last four decades.