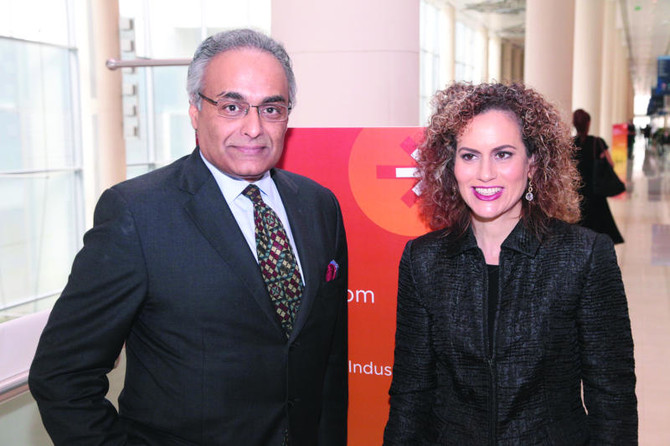 RIYADH: The Internet of Things (IoT) World Forum (IoTWF) in Dubai was a huge success with more than 2,000 attendees from across the world getting awakened to the IoT possibilities, which have the potential to generate revenue of $13.3 trillion.
The event featured visionary leaders and experts from top companies such as Etisalat, Visa, Intel, Siemens AG, Rockwell Automation, GE, Schneider Electric to name some.
The 2015 IoT World Forum highlighted three key themes.
The first theme was ‘Awaken’, which highlighted the opportunities across all industries, and helped customers discover the competitive advantages that IoT can bring.
The second theme ‘Activate’ covered laying out roadmaps to IoT deployments.
The third theme ‘Accelerate’ focused on moving the industry forward quickly, and highlighted the roles that service providers and application developers must play in enabling this speed.
In addition to the keynote speeches, the world forum also featured breakout sessions, a hackathon, a startup showcase, and smart-city tours of Dubai.
On the sidelines of the forum, John Chambers, executive chairman of the Cisco board, met with the country’s leadership, key government officials, regional customers and media.
He also delivered the keynote speech on how the IoT is creating a new world of possibilities through digitization.
Anil Menon, Cisco president for Smart & Connected Communities, said: “We have passed the incubation phase, now IoT/smart city solutions are ready to be scaled.”
Menon said: “Cities who scale first will be the winners in an increasingly competitive environment. As host to the 2015 IoTWF, Dubai is rapidly transforming into becoming one of the smartest digital cities in the world connecting the unconnected through the power of intelligent networks.”
To put the growth of IOT in numbers, one can could witness 40 to 80 billion connected objects by 2020, he said.
Smartphone is going to become the central connecting hub to various devices even as every human being will be connected to 10 different objects. Analysts estimate that the revenue potential in IOT is between $1.2 trillion to $13.3 trillion and the most significant investments will go into civic management, health care, education etc.
Inbar Lasser-Raab, Cisco vice president of Infrastructure and Digital Solutions Marketing, said:
“With the number of older people increasing, elderly care will become a crucial requirement… home will become a connected care house.”
The event also saw more than 25 customers presenting on how IoT has changed their business.
Through Dubai Smart City Experience Tours, attendees were able to learn first-hand how Dubai, one of the most digitally advanced cities in the world, has connected transportation, education and health care across the city for a better citizen experience.
A special bus tour was also arranged to the Dubai Design District (D3), which has implemented a wide spectrum of smart solutions and applications.
The IoTWF 2015 also featured a research and innovation symposium, where some of the world’s leading technology researchers and scholars talked about the new frontiers of IoT research enabling a connected world.
The world forum also organized an IoT Hackathon — a learning session and coding competition, which took place on the weekend preceding IoTWF.
The Cisco Innovation Grand Challenge, which recognizes, promotes, and accelerates the adoption of breakthrough IoT technologies and products, brought together six amazing startups to Dubai to compete for their share of $250,000 in cash prizes.
These six finalists, who were narrowed down from 15 semifinalists, got an opportunity to give their pitches live, on stage before the closing ceremony. The winners for the IoT Hackathon and Cisco Innovation Grand Challenge were announced during the event.
Rabih Dabboussi, Cisco UAE managing director and general manager, said: “Talking with government and industry leaders at the Internet of Things World Forum, it is clear that we are seeing a whole new wave of innovations in IoT and digitization that are already transforming business and society today. There was a real sense of excitement at the event as leaders from across many industries inspire one another on what is possible, as well as what’s already been achieved in Dubai’s journey toward its vision of being the smartest cities in the world by 2017.”
Referring to the advancement of technology, Sebastian Saxe, chief information officer of Hamburg Port Authority, said that “The reality is this… the reason we would look for a holistic model is that we have all this business going through the city, but it impacts the citizens. To create a model where we are able to do this without negatively impacting the citizens and the city itself is our goal.”
In his speech, Mohammad Saeed Al Shehhi, chief operating officer, Dubai Design District (d3) said: “We, at Dubai Design District (d3), are very proud to be showcasing some of the real-time Smart initiatives that are being deployed at d3, during the Cisco Internet of Things World Forum.”
He added: “Through these unique and technologically-enhanced initiatives, d3’s creative tenants will benefit by saving on utility consumption, they will receive an enriched customer experience, improved safety standards, and they will be able to tap into effective, real time data analytics that help drive their business forward.”
Cisco is the worldwide leader in IT that helps companies seize the opportunities of tomorrow by proving that amazing things can happen when you connect the previously unconnected.
Cisco and the Cisco logo are trademarks or registered trademarks of Cisco and/or its affiliates in the US and other countries.