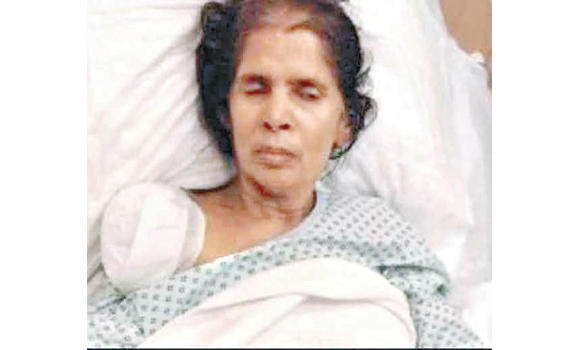 RIYADH: The Saudi government allowed the repatriation of Indian housemaid who lost one of her arms in the Kingdom, and she arrived in her home country on Saturday.
Kasturi Munirathinam, 55, allegedly lost her arm while trying to flee from her sponsor’s house.
The case was highly publicized in Indian and international media after claims that Kasturi’s hand was chopped off by her Saudi employer. The Saudi police, however, claimed that she was “mentally disturbed” and lost her arm after falling on a power generator.
Speaking from New Delhi, Saud bin Mohammed Al-Sati, the Saudi Ambassador to India, expressed happiness over Kasturi’s return to India and her reunion with her family.
Al-Sati said he has been in touch with Saudi officials in Riyadh and will release a statement after he gathers more information on the case.
Hemant Kotalwar, charge d’affaires at the Indian Embassy, confirmed that Kasturi arrived in India on Saturday.
Kotalwar, however, said that he was waiting for the final report of the case from Saudi side before making any comment.
Earlier this week, reports suggested that Kasturi’s return to India depended on the withdrawal of assault charges against her Saudi employer. “The Indian embassy processed her travel papers,” said Anil Nautiyal, a community welfare official at the Indian Embassy, in a statement.
He said the police report and the medical reports were still being processed. The worker has also not received any compensation, he added.
All charges leveled by the Indian side in the case have been refuted by the Saudi police, who said that Kasturi lost her arm after she fell on a power generator when she was trying to flee from her employer’s house. The Saudi authorities also claimed that she was ‘mentally disturbed’. The incident reportedly took place on September 29.
Kasturi, a resident of Mungileri village in Vellore district of India’s Tamil Nadu state, had arrived in the Kingdom on July 28 this year to work as a housemaid.
“With the news of her return spreading in her native place, her relatives and villagers are anxiously waiting to meet her,” said a report published in an Indian daily newspaper.
Her family members and neighbors recounted that she had volunteered to go abroad to clear their debts. The family has now appealed to the central and state governments in India to provide her lifelong medical support. According to Indian government figures, there are roughly 2.8 million Indians working in Saudi Arabia. Of these, half a million are domestic workers and about 50,000 are women.
Earlier, the Saudi Labor Ministry said that it would issue 100,000 working visas for Indian domestic workers during 2015, but there is no reliable estimate of the number of Indian female workers that this will involve.