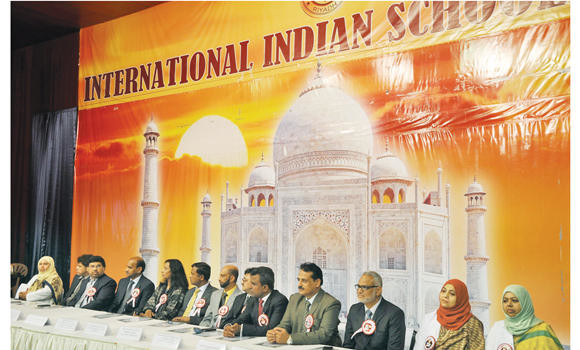 RIYADH: The annual celebration day at the International Indian School in Riyadh (IISR) was a fun-filled and power-packed show of talent, confidence and joy.
The recently held five-hour long marathon event, attended by thousands of students, teachers, parents, managing panel members and guests, brought to life the colors of merit and comradeship at the school. The event was enriched by enthralling performance by students.
In his keynote speech, Hemant Kotalwar, charge d’affaires at the Indian Embassy, provided some food for thought by saying that “intelligence is multifaceted.” He noted that some students are good at numbers, creating a benchmark in mathematics, while some are good at letters, science or cultural activities, and all such modes of excellence should be recognized.
Kotalwar, who came along with his wife, Seema Kotalwar, also released the IISR annual magazine “Anchor” at the event.
Hifzur Rehman, second secretary and observer for Indian schools, graced the occasion as the guest of honor.
While welcoming the audience, IISR Principal Shaukat Perwez called on the students and teachers to be role models, saying that “the school is the mirror of society.” According to the annual IISR report, 64 students out of a total of 746 students secured a Cumulative Grade Point Average (CGPA) of 10 in their secondary school results. In the India Senior Secondary School Examinations, 621 students passed with first class, 44 with second class and eight came within the third class category.
Rehan Mohammed Abid was congratulated for being the first student to represent IISR at the Global Young Leaders Conference in the US this year. Other noted achievers who received medals and trophies included Taha Khursheed, Syed Uzair Ahmed, Haya Khursheed, Chindurani Lakshmanan, Tasmia Firdous, Faiza Ahmed, Neya Natrajan, Shahbaz Basheer, Teena Biju, Basila Theneri, Rehma Habib Khan, Lakshmi Suresh, Mukhul Chikkara, Farsana Younus, Mohd. Naif Ata, Asma Mohammed, Syed Sarfaraz and Abdullah Mohammed and K. F. Prince.
A students’ group led by Osama Hamid Khan left the audience spellbound with their dancing number. The annual day celebrations concluded with the recitation of the national anthems of India and Saudi Arabia.
Those who spoke on the occasion included vice principals Asma Shah and Meera Rahman also spoke on the occasion; Shafi Ahmed Sattar, chairman of the IISR managing committee; and S.H.A. Hyder Ali, chairman of the IISR Annual Day.
All IISR managing committee members, including Dilshad Ahmed, Mohammed Naseeruddin, Niaz Ommer, Sultan Mazharuddin and Roji Mavelil Mathew, were present along with a large number of community members.
The event began with the reading of the annual report, which highlighted the accomplishments of the IISR in the previous session.