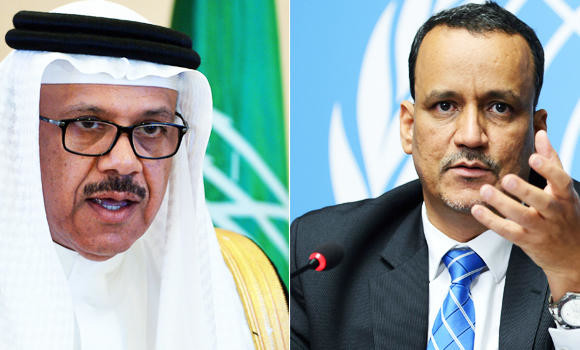 RIYADH: Gulf states have reiterated their criticism of Iran for supporting the Houthis in Yemen in violation of the UN arms embargo.

During talks here with UN Special Envoy to Yemen Ismail Ould Cheikh Ahmed on Wednesday, GCC Secretary General Abdullatif Al-Zayani stressed that Iran is the main culprit in backing the Houthis and in supplying arms and ammunition to the militants, who are responsible for the bloodshed in Yemen.
A GCC statement said that talks between Al-Zayani and the UN envoy focused on “the need to enforce UN Security Council Resolution 2216, which imposed an arms embargo on Houthi rebels and forces loyal to former President Ali Abdullah Saleh.”
“A range of other subjects including the latest developments in Yemen were discussed by the two officials,” said the GCC statement.
It also said that the Security Council voted with an overwhelming majority in April this year in favor of the resolution imposing the arms embargo against the Houthi rebels and blacklisted the son of Yemen’s former president and a Houthi leader.
In addition to the arms embargo, the GCC also demanded that the Houthis pull back and refrain from more violence.
Referring to relief operations in Yemen, the statement said that “Al-Zayani and Ismail discussed at length the need for humanitarian assistance to alleviate the sufferings of civilian population.”
Ismail also recently met with the Arab League secretary general in Cairo.
Saud-led coalition forces loyal to Yemen’s exiled government have captured more territory from Iran-backed rebels as they pressed an advance that has seen them retake large parts of the country’s south.
The gains by forces backing President Abed-Rabbo Mansour Hadi have been aided by weapons and troops from Gulf countries, as Saudi-led coalition warplanes continue to pound rebel positions.