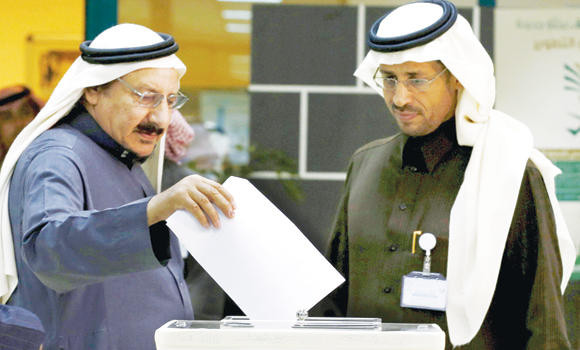 RIYADH: The historic poll for 3,159 seats at 284 municipal councils across the Kingdom concluded peacefully on Saturday amid reports of moderate voter turnout, great enthusiasm, festive mood and high security.

No incidents of irregularities were reported from the country’s polling stations, where the fate of 6,917 candidates was eventually sealed on Saturday evening.
History was also created on Saturday as thousands of Saudi women headed to polling stations across the Kingdom, both as voters and candidates, for the first time in this landmark election.
“The results of the poll will be announced on Sunday, possibly by late afternoon,” said Judea Bin Nahar Al-Qahtani, spokesman of the General Committee for Municipal Elections in Saudi Arabia.
He said that the names of the winners will be announced by the local committees, which are entrusted with the task to organize the municipal elections. To this end, Al-Qahtani said that some 1,330 election committees were authorized government entities for organizing the poll.
“Each committee has also been assigned to prepare reports and compile shortcomings of the poll process, if any, to address them immediately on priority basis,” he added, while referring to the free and fair poll that concluded Saturday.

In reply to a question about the formation of the municipal councils after the results were announced on Sunday, the spokesman said that “the new session of the council will begin on Jan 3, 2016 and will last for four years.”
As far as voting on Saturday is concerned, the voting at all polling stations in the country began at 8 a.m. and continued without any break till 5 p.m. on Saturday.
According to available information till filing of this report, the country witnessed modest voting in this election with a bigger turnout of voters reported in Riyadh.
On the question of disqualification of candidates, Al-Qahtani said that the “election officials disqualified 235 candidates including nine women for their violations of poll regulations.”
In a media briefing, he pointed out that a fine of SR50,000 had also been imposed on disqualified candidates as part of the punitive action decided by the Saudi government.
He hoped that the move would lead to a qualitative shift in municipal activities.
In fact, the Saturday civil poll was historic because of the participation of Saudi women for the first time in municipal elections both as candidates and as voters.
The participaton of women is being hailed by some activists as a historic change.
As many as 6,917 candidates are running in the election, including 979 female candidates.
There are 343 constituencies distributed all over the Saudi districts for citizens above 18 years.
On the question of voters’ turnout across the Kingdom, a polling station official told Arab News on the condition of anonymity that “the voters presence at polling booths are not consistent, its more somewhere, while there are only a few voters at some other stations.” Some of the booths in Riyadh and possibly in other cities like Jeddah and Dammam are even crowded, he said.
Sources also confirmed to Al Eqtisadiya news website that the turnout will not exceed 60 percent.
Speaking about the participation of women as candidates and voters for the first time in Saudi Arabia, Laila Al-Hamdan, a paramedical staff working at a local hospital, said that ‘it is a major move on the part of the Saudi government, which has allowed women participation the elections.”
“I thank Custodian of the Two Holy Mosques King Salman for the reforms he has initiated for women empowerment,” she added.
Candidate Latifa Al-Bazei, a 53-year-old public school principal, said her participation in the race felt like a continuation of her service to the community.
She wants to see  Saudi Arabia’s majority youth population under 25 years old get more involved in their local communities with an aim to serve the Saudi society.
“I’ve served 23 years as a teacher and school administrator ... My goal is development, change and innovation,” she said at a Riyadh polling station after casting her vote.
At the King Salman Social Center in north Riyadh, where men and women went into different parts of a building to cast their ballots, voters of both sexes were seen exercising their franchise.
Arab News took a round of some of the city’s polling stations, where voters were seen in sizeable numbers.
Kareem Al-Otaibi, a local businessman, said that “he will vote for his friend who is contesting the poll.”
Al-Otaibi said that “many of my friends and family members have already casted their votes in the morning.”
The election that concluded Saturday is for two thirds of seats on councils that previously had only advisory powers, but will now have a limited decision making role.
About 1.48 million Saudis from a population of 20 million were registered to vote in the election, including 131,000 women.