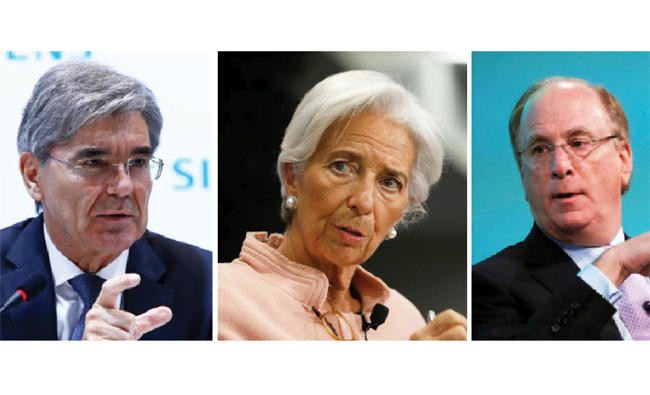 RIYADH: A major conference hosted by the Public Investment Fund (PIF) gets underway in the Saudi capital today attended by some of the world’s top business leaders and money managers.
The Future Investment Initiative (FII) is being organized in the context of Saudi Vision 2030, the Kingdom’s ambitious blueprint for economic reform.
It is being held under the patronage of King Salman and under the leadership of Crown Prince Mohammed bin Salman, who will today welcome some 2,500 delegates to the event.
Dozens of the biggest names in global business are making the trip to Riyadh — among them IMF chief Christine Lagarde and BlackRock boss Larry Fink.
The pair will be among the speakers opening the plenary session of the conference which also includes Saudi Aramco CEO Amin Nasser.
The event will see “internationally-renowned business leaders and influencers discuss how the challenges of the future can be addressed,” said PIF Managing Director Yasir Othman Al-Rumayyan.
Attendees are set to grapple with the big themes of the global economy across a range of industries and against a backdrop of unprecedented economic reforms underway in the Kingdom.
“We see FII as a unique opportunity for the global community to bring together aspirational thinking around the future of the world economy with the realities of investment,” said Pedro Oliveira, Oliver Wyman’s regional managing partner.
“We are delighted to be partners to the PIF in driving that thinking around financial services, health care and life sciences as well as urban planning and infrastructure,” he added.
Other confirmed speakers at the event represent the leaders of major asset managers including Thomas Barrack, executive chairman of Colony NorthStar; Leon Black, chairman and CEO of Apollo Global Management; and Victor Chu, chairman and CEO of First Eastern Investment Group.
These top asset managers will be joined by speakers representing a range of sovereign wealth funds and pension funds.
Most of the important GCC sovereign wealth funds will also be represented at the event including Mahmood Hashim Al-Kooheji, CEO of Bahrain Mumtalakat Holding Company and Khaldoon Al-Mubarak, the CEO of Mubadala Investment Company.
The first day of the conference will begin with CNBC’s Andrew Ross Sorkin leading a panel of financial experts in debating the new social, economic and intellectual frameworks needed to drive global progress.
Another key session will examine breakthroughs in artificial intelligence, robotics, virtual reality, big data, social media, medical science, and smart infrastructure.
The event is also set to make headlines away from the main stage with major projects of the future on display as well as cutting -edge technology.
The first day of the investment conference will wrap up with energy executives discussing the technology expected to shape the future of the sector — with the keynote address set to be delivered by Saudi Energy Minister Khalid Al-Falih.
Other sessions will explore topics such as the future of the information economy, leadership and he age of uncertainty.
Global management consultancies from McKinsey, BCG and Oliver Wyman will also be in attendance — some of whom have been working on projects linked to the Kingdom’s economic transformation.
The gathering aims to explore the evolving role of sovereign wealth in driving the next wave of business, innovation, technology and investment.
Established in 1971 to invest in commercial project, the PIF has contributed to the establishment of numerous Saudi Arabian companies, supporting innovation, industrial diversification and non-oil sector development in the Kingdom.