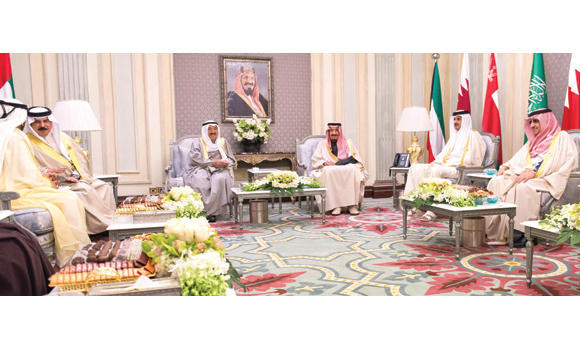 RIYADH: Gulf Arab leaders condemned “hostile, racist” remarks against Muslims and Syrian refugees in a statement issued on Thursday, days after Republican presidential candidate Donald Trump called for a US ban on the entry of Muslims.
“The supreme council expressed its deep concern at the increase of hostile, racist and inhumane rhetoric against refugees in general and Muslims in particular,” the Gulf Cooperation Council said.
The condemnation figured prominently in the final communiqué issued by the GCC after the concluding session, which was chaired by Custodian of the Two Holy Mosques King Salman.
The summit leaders concluded their deliberations, adopting a spate of key decisions including approval to activate the joint military command that would strengthen the bloc’s defense capabilities amid growing regional challenges.
The GCC leaders also lent their support to form a regional police force by welcoming the signing of the accord for establishing the GCC police headquarters in Abu Dhabi.
“The GCC heads of state endorsed the decision of the GCC Defense Council to activate the unified military command and approved the allocation of the needed budget and human resources,” said the final communiqué.
To this end, the GCC leaders also renewed their call to intensify efforts to restore peace in the Middle East, the most militarized region in the world.
Plans for establishing the unified military command were announced at the 34th GCC summit, held in Kuwait City in December 2013. During that meeting, GCC leaders tasked the organization’s Joint Defense Council to take “all necessary measures” to maintain the security and stability of member states and build a unified defense system. Similarly, the GCC, in one of its summits, decided to form a regional police force called the GCC-Pol based in Abu Dhabi.
In an apparent reference to the urgent need to support resolution of regional conflicts, the communiqué called for “providing necessary protection to the displaced people and refugees, who are fleeing the twin fires of unjust rule and terrorist groups.”
Referring to the catastrophic situations in several countries of the region including Syria and Yemen, the GCC leaders reiterated their calls for “a political solution to the wars in Yemen and Syria.”
Referring to the urgent need to restore peace in war-torn Yemen, the GCC states called for holding an international reconstruction conference for Yemen after a deal to end its civil war is reached. The conference will be a logical step because the war in Yemen has so far killed thousands of people and caused widespread damage to the country’s economy and infrastructure, said the GCC communiqué, called “The Riyadh Declaration.” It was read out by Abdullatif Al-Zayani, GCC secretary general. Al-Zayani and Foreign Minister Adel Al-Jubeir also briefed the media on the outcome of the GCC summit.
Yemeni warring parties are due to gather in Switzerland next week for UN-sponsored peace talks. “The GCC member states have called for an international conference for Yemen’s reconstruction after the parties reach the aspired political solution,” Al-Zayani said in the statement, broadcast on Saudi TV. He said that Yemen has been ravaged by months and years of civil war.
The communiqué also stressed the common resolve of the GCC leaders to extend all support for counterterrorism efforts regionally and globally. The communiqué further said that a common judicial authority will also be set up with an aim “to unify the justice system, legislation and environment.”
Referring to the renewed efforts to unify the rank and file GCC member states, the communiqué called on all member states to strengthen “the concept of integration in security, military, economy, political and social fields.” To this end, the communiqué said that an agreement has been reached by member states “to complete the remaining requirements for the creation of a full-fledged GCC Customs Union.”
Speaking during the concluding session, Bahraini King Hamad bin Isa Al-Khalifa invited the GCC leaders to hold the next summit in Bahrain.
The concluding session of the GCC summit was also attended by Crown Prince Mohammed bin Naif, Deputy Crown Prince Mohammed bin Salman, Minister of Finance Ibrahim Al-Assaf and Foreign Minister Adel Al-Jubeir.