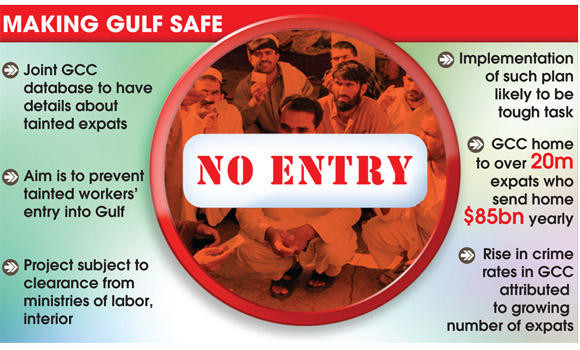 In yet another move to cut reliance on foreign labor, the six-nation Gulf Cooperation Council (GCC) is working on a joint database project that will contain comprehensive information about tainted foreign workers.
The plan is aimed at preventing the entry of a foreign worker into any Gulf country, if proof is found of his criminal involvement in his previous country of residence.
“The project is subject to clearance from the ministries of labor and interior of the GCC countries,” said a GCC source, Saturday. He said the details of the database and the mechanism to follow were discussed by the GCC labor ministers’ meeting held in October last.
Referring to the benefits of this project, Hashim Kareem, an agent at a manpower recruitment company, said the move would “prevent a foreign worker from entering any Gulf state if he/she has committed a crime in another GCC state which has led to his/her conviction or deportation.”
He, however, observed that the implementation of such a plan would be very difficult. “In fact, many expatriates deported from Gulf countries often obtain false travel documents under a different name to re-enter the same country or another GCC state,” he noted.
Kareem said the crime rates had risen in the GCC countries and the growing presence of foreign workers is cited as one of the reasons.
“But the severity of penalties and the rigid system of enforcement are credited by both officials and ordinary citizens with contributing to the high standards of public safety still prevalent in the Gulf including Saudi Arabia,” he added. The database will include details of all expats, who have broken civil and criminal laws or been convicted or deported.
To this end, it must be noted that the secretariat of the Chambers of Commerce of the Federation of the GCC has also warned of the negative social and economic influences of the growing number of the migrant workforce, especially those involved in crime.
It has stressed the need to develop effective policies to address them.
In fact, the percentage of the migrant workforce in the GCC countries represents about 70 percent of the total number of laborers.
Saudi Arabia alone has an expatriate population of over 10 million from its total population of 31 million.
Currently, GCC as a bloc is home to over 20 million foreign workers, who remit nearly $85 billion to their home countries annually.