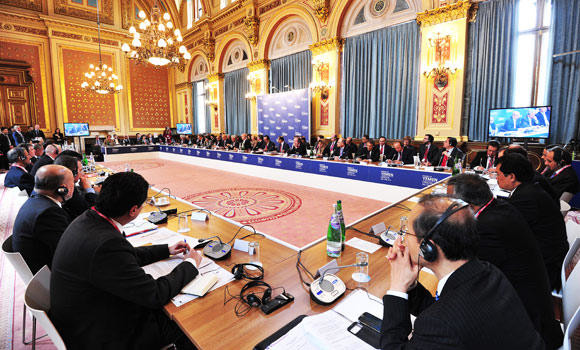 The six-nation Gulf Cooperation Council (GCC), including Saudi Arabia, will attend a high-profile ministerial conference held by the “Friends of Yemen” group in New York on Sept. 24.
The meeting will renew calls for donors to raise contributions and honor their past pledges, while setting priorities for action on security and political transition amid growing insecurity and violence in Yemen.
Foreign Minister Prince Saud Al-Faisal will address the meeting, said Foreign Ministry spokesman Osama Nugali.
The Yemen conference is being hosted at a crucial time when the UN Security Council has called for an end to violence in Yemen as Houthi fighters and militants of Al-Qaeda in the Arabian Peninsula (AQAP) fight Yemeni military and security forces. The Houthi fighters have captured some key government agencies in Sanaa, including the Defense Ministry.
“A Yemeni delegation, led by Foreign Minister Jamal Al-Sallal, would brief the conference about Yemeni economy, security and human rights challenges,” said a report released by the Yemeni Foreign Ministry. The report said that the Yemeni government is making efforts to absorb donor funds into strategic infrastructure projects such as electricity and road construction.
With the situation spinning out of control in Sanaa and other Yemeni cities, it will be difficult for the time being to implement any project funded by the Friends of Yemen group. That country has already spent 26 percent of the funds donated by member countries of the Friends of Yemen group over the past two years.
Saudi Arabia has been on the forefront of donor nations to extend all kinds of aid to Yemen.
The Kingdom renewed its support to President Abed Rabbo Mansour Hadi’s efforts to achieve security, stability and unity of Yemen last week, when Saudi Deputy Foreign Minister Abdulaziz bin Abdullah met Al-Sallal on the sidelines of a regional security conference in Riyadh.
Saudi Arabia and the Gulf states have expressed concern about the situation in that country. A European Commission report released recently also sounded alarm on the deteriorating condition of Yemen, where 14.5 million people are in need for urgent humanitarian aid today. “Securing food is a major challenge facing some 10.5 million Yemenis and number of children suffering from acute malnourishment jumped to 1.6 million this year,” the report warned.
The Friends of Yemen group was established in January 2010 through a UK initiative to help bolster international political support for Yemen. The group consists of 31 foreign and regional states, including Saudi Arabia, the UK, Egypt, Qatar, the United States, Russia, Kuwait and Turkey. International organizations, including the United Nations, the Arab League, the European Union, the GCC, the Organization of Islamic Cooperation and the World Bank are also part of the group.