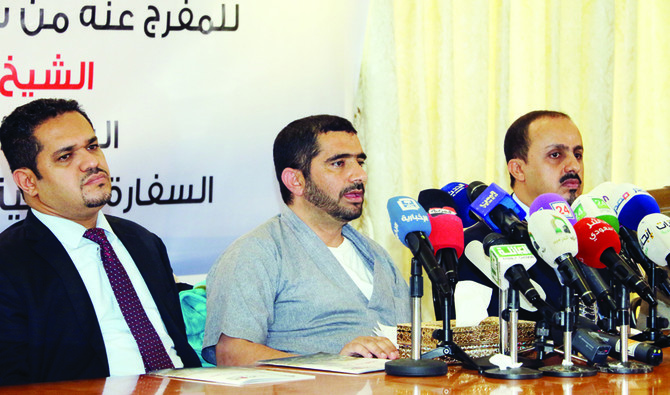 RIYADH: A former detainee on Wednesday told of torture and murder in the jails and camps of the Iranian-backed Houthi militias and called for international human rights organizations to inspect the conditions of thousands of detainees across Yemen.

Addressing a crowded press conference at the Yemen Embassy in Riyadh on Wednesday, Gamal Al-Maamri, a Yemeni activist released by Houthi militias in a prisoner swap, shared details of his ordeal after he was abducted in March 2015 and taken to the National Security Bureau prison in Sanaa.

A video showing Al-Maamri’s torture, which sparked anger and condemnation of Houthi brutality, was also shown during the press conference.

Al-Maamri said that many prisoners had died because of excessive torture.

Al-Maamri had earlier arrived in Riyadh after he was released from three years of detention, where he was tortured to paralysis by the rebels. They concocted charges against him, accusing him of being an informer for Iranian targets, working against Houthi interest and spying for the Yemeni government.

Al-Maamri, a tribal chieftain, said that he was captured by the Houthis on March 13, 2015, from his hotel room in Saana.  “Then I was taken to a house and upon arriving dragged mercilessly on the stairs of the house and assaulted with all objects including rifle butts until I lost consciousness,” he said. “As I gained consciousness, they started beating me again and kept torturing me for eight straight days.”

Al-Maamri, who is receiving treatment in Saudi Arabia, said: “I was subjected to various types of systematic torture, until I was totally paralyzed with even my private parts badly damaged.”

“The Houthis’ torture damaged the nerves of my left upper and lower limbs, which paralyzed the left side of my body,” he said.

“On the top of that, they kept torturing all detainees including me,” said Al-Maamri. “I received successive blows to the back of my head and spine, and because of the beating, it led to coma and paralysis of my limbs.”

“I was having regular period of coma for about five months on a daily basis, lasting for five to six hours, as a result of torture.” A large number of prisoners had undergone systematic torture and death at the hands of the Houthi militants, he said.

Al-Maamri called on the international community, especially the UN, the UN Security Council and human rights organizations, to inspect the status of thousands of detainees held in the rebels’ jails. He said that “one of the methods of torture is that the deprive you of sleep.”

The Yemeni government has reaffirmed that the case of those abducted by Houthi militias tops its list of priorities for consultations with UN agencies.