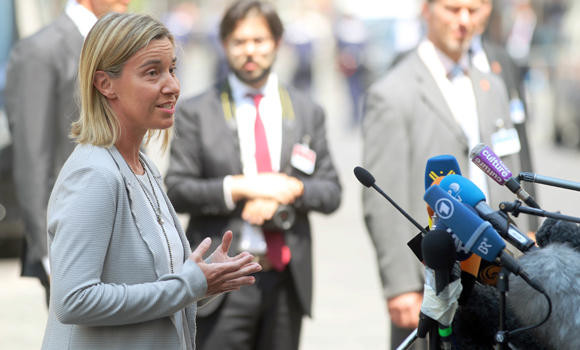 RIYADH: Federica Mogherini, foreign policy chief of the European Union, will visit Saudi Arabia on Monday to discuss a range of regional issues, including the international nuclear deal with Tehran, which has been met with concern in the Middle East.
The EU’s top diplomat will also visit Iran during this trip.
Ambassador Adam Kulach, head of EU’s delegation in Riyadh, confirmed the visit and said that Mogherini would hold talks with Saudi officials, including Foreign Minister Adel Al-Jubeir.
“A range of pressing regional issues of common concern as well as bilateral subjects will be discussed with Saudi officials during her visit,” he added.
After her Saudi leg of the trip, Mogherini will travel to Iran on July 28 for exchanges on the implementation of the recently concluded nuclear agreement. “The visit to Iran will provide an opportunity for exchanges on the implementation of the agreement, on which the EU high representative will continue to play a coordinating role,” said a statement issued by the EU.
The EU, led by Mogherini, played a leading role in talks between Britain, China, France, Russia, the United States, Germany and Iran. The talks finally produced an accord last week on preventing Tehran from acquiring a nuclear weapon. But, the accord is still seen with concern by several nations and groups.
Under the nuclear accord, the world powers have agreed to lift economic sanctions as long as Iran sticks to the deal they hope will eventually normalize ties with Tehran after years of intense distrust.
Mogherini’s trip follows visits to the region by top German and Italian politicians, as well as US Defense Secretary Ashton Carter.