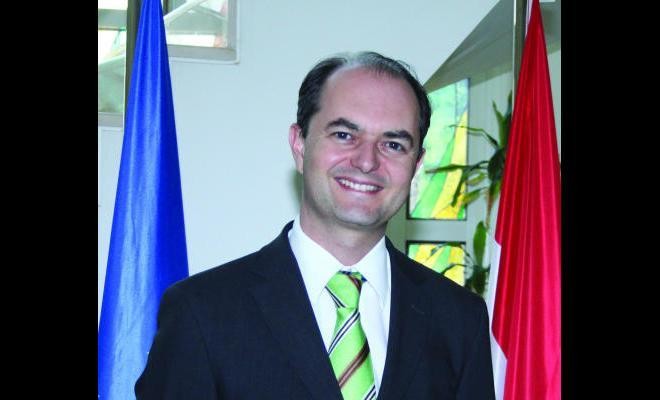 “The Vienna-based KAICIID is functioning smoothly,” Austrian Ambassador Gregor W. Koessler, said here Sunday.
Koessler, who was speaking to Arab News about growing Saudi-Austrian relations in different sectors, said: “The Vienna center has been working within the framework of its mandate to promote dialogue among religions, peace and deeper understanding.”
The center has been actively pursuing its programs, and has come forward to condemn strongly acts of terror globally, he added.
He said that the Saudi-funded center is required to “renew its mandate in autumn this year. “In fact, the KAICIID is the only global organization to work together on an equal footing with leaders of the five major world religions to create a better understanding. It does this by enhancing understanding and cooperation between people of different cultures and followers of different religions.
The KAICIID was founded by Saudi Arabia, Austria and Spain, representing the “Council of Parties” responsible for overseeing the work and the functioning of center. Its board of directors, which designs and supervises the center’s programs, comprises prominent representatives and scholars from five major religions — Islam, Buddhism, Christianity, Hinduism and Judaism.
Referring to the growing relations between the Kingdom and Austria, Koessler said that a joint business meeting, to be held on Oct. 11, will give a major boost to the commercial links.
The diplomat, who will be shortly leaving for Vienna for diplomatic consultations, said that this high-powered business meeting will be held within the framework of the Saudi-Austrian Joint Economic Committee.
The meeting will focus on a range of topics including Saudi Vision 2030. “It will be a sort of review meeting in which our strategic relationship will top the agenda besides a number of economic topics of mutual interest,” said the envoy.
He pointed out that the companies and the businesses of the two countries have evinced a keen interest to work together within the framework of Vision 2030, which offers a clear road map for development.
He said Saudi citizens traveling to Austria would be able to rent and drive cars in Austria following the signing of the Convention on Road Traffic of Vienna 1968. Moreover, Austria welcomes the increasing numbers and the growing interest of Saudi citizens to travel to the country. The number of Saudis traveling to Austria has tripled in the last four years, with 118,000 Saudis traveling to that country last year.
Austria is one of the preferred destinations in Europe for Saudi tourists as the country offers a great variety of holiday experiences within short distances. Austrian cities offer a vibrant mix of family entertainment and shopping centers with many UNESCO World heritage sites. This is in addition to natural panoramic views, sports, cultural programs and a range of entertainment programs for chidlren, adults and families.