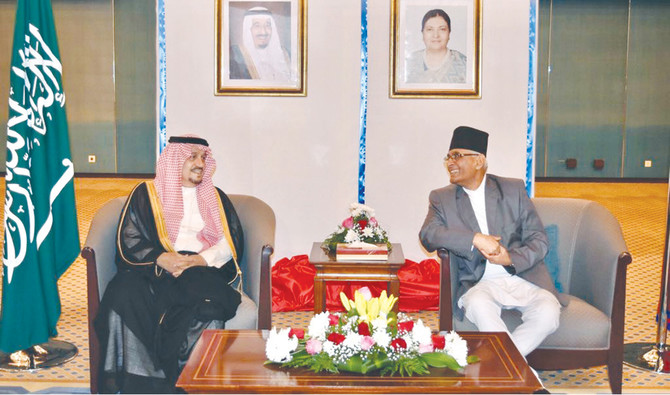 Riyadh Gov. Prince Faisal bin Bandar was the chief guest at a special celebration of Nepal’s National Day hosted by the Nepalese Embassy.

The event, at the Cultural Palace in Riyadh’s diplomatic quarter, began with the national anthems of Nepal and Saudi Arabia. Then Dr. Mahendra Prasad Singh Rajput, ambassador of Nepal to Saudi Arabia, welcomed the guests — including senior Saudi officials, diplomats, business leaders, embassy staff and members of the Nepalese community — and highlighted the importance of Nepal’s Constitution Day, which is celebrated as the country’s National Day.

Acknowledging the cooperation between the Kingdom and Nepal in a number of fields, the ambassador said he is happy that the two countries have enjoyed excellent relations since they established diplomatic ties four decades ago, and pledged his commitment to further developing and strengthening the relationship.

Rajput thanked the Saudi government for its support for and cooperation with the socioeconomic development of Nepal. He also emphasized the role of Nepalese workers in the development of Saudi Arabia, along with the contribution they make in supporting the economy in their home country.

During a conversation with the ambassador, Prince Faisal congratulated Nepal and the Nepalese people and expressed his satisfaction with bilateral relations between the two countries.

The embassy also used the occasion to promote Nepal’s tourism industry and culture, handing out brochures to guests. In addition, a documentary about the country’s main tourist attractions was screened, featuring the country’s art, cultural heritage, geographical splendor and adventure-tourism activities. Guests were also able to sample traditional Nepalese food and drink, including organic tea and noodles.