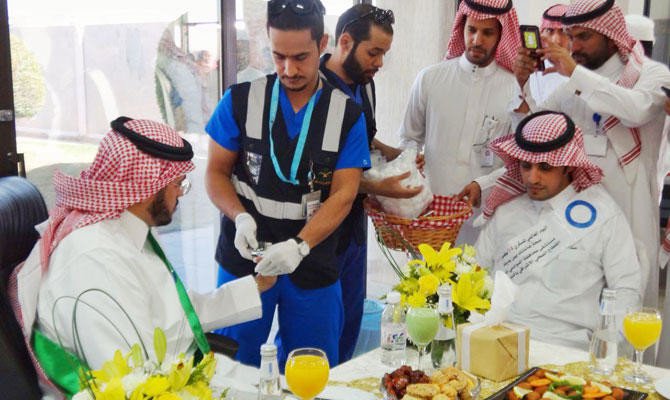 RIYADH: Saudi Arabia is sitting on a diabetes time bomb. The number of cases has exceeded 3.8 million and a huge majority of sufferers have no knowledge about the illness and its association with cardiovascular diseases. Type 2 diabetes is at an all-time high in the Kingdom, affecting the quality of life, including productivity.
A survey conducted by the Saudi Scientific Diabetes Society (SSDS) said that “more than 52 percent of patients with type 2 diabetes die of cardiovascular causes.”
The Kingdom has an 18.5 percent prevalence rate in the adult population, which ranks the country among the top 10 in the world with the highest prevalence of diabetes,” said the survey.
Speaking during the presentation of the survey, Dr. Saud Al-Sifri, vice president of the SSDS, said: “Type 2 diabetes is a serious epidemic, not just in Saudi Arabia but around the world … despite numerous efforts, awareness levels remain low around the knowledge gaps within type 2 diabetes management and cardiovascular disease risk implications ... Patients with type 2 diabetes are at an increased risk of developing heart disease.”
He advised patients to go for “regular checkups and have open conversations with their doctors. Given the importance and relationship between CVD and diabetes, there are new classes for type 2 diabetes treatment that have shown significant improvement in cardiovascular outcome trials,” said Al-Sifri, urging all stakeholders to address the issue Kingdom-wide. The survey, which was carried out by the SSDS in collaboration with Ipsos, a global market research and consulting firm, said that “52 percent of the patients perceive obesity to be more serious than type 2 diabetes, confirming that increasing public awareness about a specific disease alters their perception.” In fact, 45 percent of respondents did not discuss cardiovascular disease’s association with physicians, it added.
“Only 24 percent of respondents fully agreed that their current lifestyle is healthy and only 7 percent agreed that their current diet is healthy,” explained the survey.