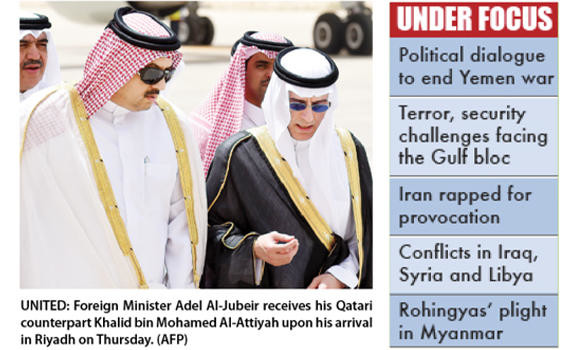 RIYADH: The Saudi-led coalition bombing Iran-backed Houthis in Yemen for more than two months will continue until a UN resolution calling for a rebel pullback takes effect, Qatar's foreign minister said on Thursday.
Khalid Al-Attiyah spoke after chairing a meeting of his counterparts from the six-nation Gulf Cooperation Council.
"The coalition will not be over without the application of the related Security Council resolutions and especially the Resolution 2216," Al-Attiyah told reporters.
That resolution, issued in April, calls on the Houthis to relinquish the territory they have seized.
The GCC ministers called for a political dialogue to end the spiraling conflict and hailed the UN for its efforts in convening a meeting in Geneva on June 14.
The ministers also discussed terrorism and key regional issues, including the conflicts in Syria and Iraq as well as the security challenges facing the Gulf bloc, besides the plight of the Rohingya Muslim minority in Myanmar.
“The crisis in Yemen and terrorism topped the agenda of the 135th session here,” said Al-Attiyah, who chaired the meeting.
In his opening speech, Al-Attiyah said: “The meeting comes at a time when the Gulf region is facing challenges, risks and threats, particularly terrorism and violence; whose political, security and economic implications can’t be ignored.”
He appreciated the efforts of Bahrain in foiling the terrorist plot that aimed to undermine the security and stability of that country. He said that the meeting also warned of the threats that “terrorism poses to national security” in the region, stressing the necessity to challenge and curb the menace locally and regionally.
Referring to the volatile situation in Iraq, the ministers reaffirmed their support for national reconciliation. They also pledged to extend all possible help in fighting terrorism on Iraqi soil and its neighborhood.
On Syria and Libya, the ministers voiced their support to all efforts that are directed toward securing peace and security in those countries.
On the plight of Muslims in Myanmar, the ministers called on the international community, including the UN Security Council, to put in more efforts to find a solution to the problems faced by the Rohingya Muslims.
The ministers condemned Iran for making “provocative statements and for meddling in the affairs of the GCC”, especially in Bahrain. They denounced the statements made by Israeli Prime Minister Benjamin Netanyahu, in which he reiterated his plan for building more settlements in Jerusalem.
The Saudi delegation to the GCC meeting was led by Foreign Minister Adel Al-Jubeir. GCC Secretary-General Abdullatif Al-Zayani also spoke during the opening session.
The meeting was significant as it comes a few days before the high-profile meeting of the OIC foreign ministers on Yemen in Jeddah on June 16 and the UN conference on Yemen in Geneva on June 14.
The other GCC foreign ministers who attended the Riyadh meeting were Yusuf bin Alawi bin Abdullah of Omani, Sheikh Abdullah bin Zayed Al-Nahyan of the UAE, Sheikh Sabah Khaled Al-Hamad Al-Sabah of Kuwait and Sheikh Khalid bin Ahmed bin Mohammed Al-Khalifa of Bahrain.