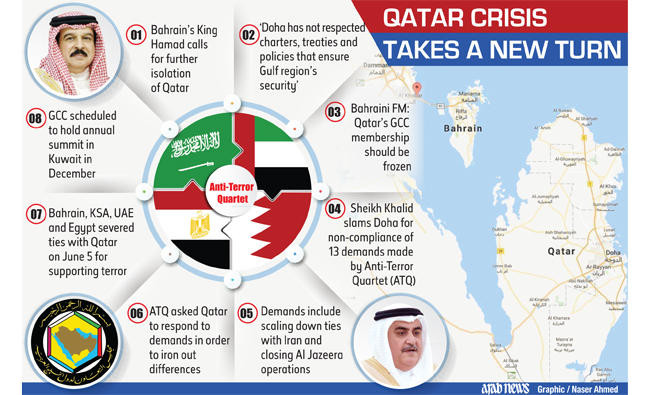 RIYADH: Manama on Monday called for Qatar’s membership of the Gulf Cooperation Council (GCC) to be suspended until it accepts the demands of the Anti-Terror Quartet (ATQ), comprising Saudi Arabia, the UAE, Egypt and Bahrain.
King Hamad bin Isa Al-Khalifa called for further isolation of Doha, saying: “Bahrain will not attend any GCC Summit unless Qatar returns to its senses.”
During a Cabinet meeting, King Hamad said: “Doha has not respected the charters, the treaties and the policies that ensure the security of the Gulf region.”
This followed Bahraini Foreign Minister Sheikh Khalid bin Ahmed Al-Khalifa’s call for “freezing” Qatar’s GCC membership, tweeting: “Manama will not attend the upcoming GCC Summit if Qatar takes part.”
He strongly criticized Doha for non-compliance with the ATQ’s 13 demands, which include scaling down ties with Tehran and closing down Al Jazeera.
The ATQ severed ties with Qatar on June 5, accusing it of supporting terrorism and extremism.
Contacted by Arab News on Monday, the spokesmen of the GCC general secretariat and the Saudi Foreign Ministry did not comment on Manama’s statements.
Bahrain’s king and foreign minister are the first senior officials from the GCC to suggest Qatar’s suspension from the six-nation bloc.
“Qatar’s failure to respond positively to our just demand to stop conspiring against our countries proves that it does not respect the GCC,” Sheikh Khalid said.
“Given Qatar’s rogue policy and pervasive evil that threaten our national security, our countries have taken an important step by boycotting Qatar in the hope it regains its senses.”
Sheikh Khalid, who posted a series of tweets to his 445,000 followers, added: “If Qatar thinks that its procrastination and its current evasion will buy time until the next GCC Summit, then it is wrong.”
He said: “If the situation remains as it is… Bahrain will not attend the summit and sit with Qatar, a country that is getting closer to Iran every day and is bringing in foreign forces, both of which are dangerous steps against the security of the GCC countries.”
Kuwait has tried to mediate between the two sides, but almost five months into the dispute, no progress has been achieved. Founded in 1981, the GCC is scheduled to hold its annual summit in Kuwait in December.
In a separate development, Qatar’s emir said he is ready for US-hosted direct talks aimed at solving the crisis, but has yet to hear a response to President Donald Trump’s invitation to the ATQ members.
Sheikh Tamim bin Hamad Al-Thani told US broadcaster CBS News that he wants an end to the dispute.
“Nothing is going to be above our dignity, our sovereignty. But we want it to end. I always say that,” he told the “60 Minutes” program in an interview aired on Sunday.
“If they (are) going to walk 1 meter toward me, I’m willing to walk 10,000 miles toward them.”
Sheikh Tamim said Trump had told him that he “will not accept my friends fighting among themselves,” and that in talks on the sidelines of a UN meeting in September, he had offered to host talks in the US.
“I told him straight away, ‘Mr. President, we are very ready. I’ve been asking for dialogue from day one’,” Sheikh Tamim said.
He reiterated that Qatar will not close down the Doha-based Al Jazeera television network. He also said he feared for the region if any military action is taken as part of the crisis, Reuters reported.