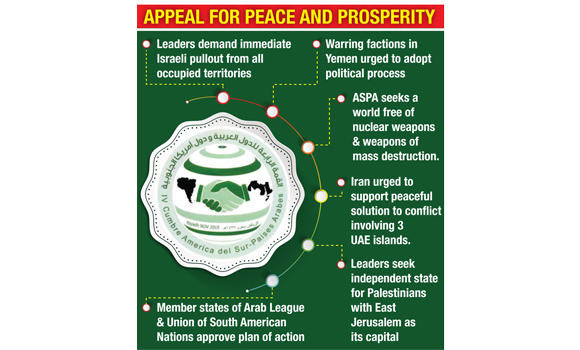 RIYADH: The 4th Summit of Arab-South American States (ASPA), chaired by Custodian of the Two Holy Mosques King Salman, has resolved to collaborate and cooperate in different sectors to develop “strategic partnership” between the two major economic blocs of the world.
The call to forge the strategic partnership was made in the Riyadh Declaration released here Wednesday.
The declaration, read out by Abdul Aziz Al-Saqer, ASPA summit’s secretary-general, addresses several political issues and conflicts. It calls for finding peaceful solution to the conflicts in the Arab world, promoting both regions as free from nuclear weapons and strengthening economic ties. The clauses of the final declaration were approved unanimously by the 22 member states of the Arab League and 12 member states of the Union of South American Nations (UNASUR) on Wednesday.
The priority areas of action in the Riyadh Declaration include joint fight to curb terrorism, solve Syrian crisis, solve Palestine problem, defuse Yemeni crisis, and check nuclear proliferation on regional and global levels. The declaration also called on Iran to respond to the request of the UAE to find a peaceful solution of the conflict involving the three islands of Abu Musa, Greater Tunb and Lesser Tunb.
The Riyadh Declaration categorically states that no foreign country could be allowed to meddle in the affairs of a sovereign nation in violation of the UN charter and the principles of good neighborliness.
The ASPA leaders in their final communiqué stressed “the importance of respecting the unity, sovereignty, independence and territorial integrity of nations.”
On the Palestine-Israeli conflict, the summit’s declaration called for “immediate Israeli withdrawal from all occupied Arab territories and take all necessary measures to create an independent state for Palestinians with East Jerusalem as its capital.” Arab and South American leaders called “for immediate and unconditional release of all Palestinian and Arab prisoners languishing in Israeli jails.”
The declaration released in the form of joint communique emphasizes the “need to achieve a just and comprehensive solution to the Palestinian conflict in accordance with the relevant resolutions of the UN.”
Referring to the joint resolve to curb the menace of terrorism, the declaration calls for “peaceful and prosperous future for mankind — a world free from dangers of terrorism, nuclear weapons and weapons of mass destruction (WMDs).”
The declaration, however, strongly supports the use of nuclear power for peaceful purposes, saying it as “undeniable right for the signatory states of the Non-Proliferation Treaty.”
The declaration strongly urged the warring factions in Yemen to adopt political process to ensure immediate peace and security in that war-torn country.
The ASPA leaders supported the political process that has been put in place in Libya. They, at the same time, expressed their rejection to any interference in the internal affairs of countries in the region by foreign powers.
On economic front, the two regional blocs have agreed to explore possibilities to endorse free trade agreements and sign avoidance of double taxation accords in a move to boost commercial links.
The Arab and South American leaders agreed to help promote capital flows and transfer of technology, especially in areas like trade, agriculture, power, infrastructure, tourism and IT.
The declaration welcomed the signing of a framework agreement between the two regional blocs on trade and economic cooperation. On the question of environment, the Riyadh Declaration welcomes the framework convention of the UN on climate change. To this end, it is important to note that Saudi Arabia, whose oil-fueled economy could suffer from global efforts to reduce greenhouse gas emissions, has submitted a commendable climate action pledge to the United Nations.
The policy pledge, just weeks ahead of a UN climate summit in Paris, was mainly focused on efforts to diversify the Saudi economy and study different aspects of climate change. Though the Riyadh Declaration does not mention much about the dwindling oil prices, but King Salman discussed ways to solve the financial problems of oil-exporting countries with the Venezuelan president Nicolas Maduro here after the summit concluded.
King Salman received Maduro in the King Abdulaziz Conference Center separately on the sidelines of the summit.
The declaration underscores the importance of promoting cultural and social communication between the two regions — Arab League and UNASUR. The declaration finally welcomes the proposal made by Venezuela to host the 5th ASPA summit.