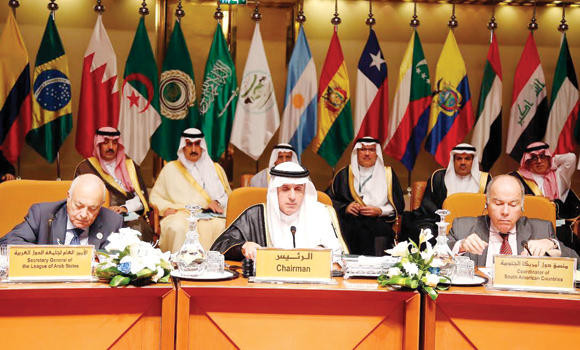 RIYADH: Arab and South American nations will seek to boost social, political and economic ties at their fourth summit starting Tuesday, said Custodian of the Two Holy Mosques King Salman on Monday.
While chairing a Cabinet meeting at Al-Yamamah Palace in Riyadh, King Salman said the summit of Arab-South American Countries, better known by its Portuguese and Spanish acronym ASPA, would hopefully be a “grand success.”
On Monday, the foreign ministers of the participating countries held a consultative meeting to discuss topics on the agenda. Foreign Minister Adel Al-Jubeir represented the Kingdom in the meeting.
Uruguay Ambassador Carlos Mora, whose country holds the chair of the 12-nation Union of South American Nations, said that the opening ceremony of the summit would be addressed by King Salman and his country’s Vice President Raul Sendic.
Mora said the Brazilian foreign minister would deliver a speech at the opening session because Brazil is the regional coordinator of the ASPA summit. On behalf of Arab countries, Nabil Elaraby, secretary-general of the Arab League, will also speak during the opening ceremony at the King Abdul Aziz International Conference Center.
Prince Turki bin Mohammed bin Saud Al-Kabeer, deputy foreign minister for international relations, said the summit would focus on bolstering political, trade, cultural and investment cooperation between the two regions.
Prince Turki said that Arab states are “well aware of the importance of having good relations with our friends in the South American region.” The ASPA summit would address a whole range of issues including on priority regional issues such as Palestine, Syria, Yemen and Libya.
The volume of trade between Arab and South American countries has been in the region of $30 billion annually. Both sides have stated their commitment to develop this cooperation further.
Those who have stated they would attend and others who have arrived include Venezuelan President Nicolas Maduro, Sudanese President Omar Al-Bashir, Guyana President Carl Greenidge, Argentine Vice President Amado Boudou, and Jordanian Deputy Prime Minister and Foreign Minister Nasser Judeh.
Lebanese Prime Minister Tammam Salam will fly to Riyadh on Tuesday and is expected to discuss the latest developments related to a Saudi-funded arms deal to equip the Lebanese Army. Lebanon’s Defense Minister Samir Moqbel, Finance Minister Ali Hasan Khalil, and Foreign Minister Gebran Bassil will be accompanying Salam.
Brazilian Foreign Minister Mauro Vieira and Suriname Foreign Minister Niermala are also in the Saudi capital for the summit. Many other countries from the Arab world and South America will be represented by special envoys, senior ministers and diplomats. On the sidelines of the preparatory meetings, Brazilian Minister of Agriculture, Livestock and Supply Katia Abreu and Salah Almaiman, vice president of the Saudi Food and Drug Administration, signed here Monday an international sanitary agreement to end the embargo on Brazilian beef exports to Saudi Arabia.
“After three years, we celebrate the end of the ban with all countries,” she said. In the wake of the Saudi move, the industry expects neighboring countries Qatar, Bahrain and Kuwait to follow suit. On a bilateral level, the Kingdom and Brazil have been discussing proposals to forge closer ties in agriculture.
The ASPA summit is a bi-regional mechanism for cooperation and political coordination held every three years. It brings together the 22 member states of the Arab League and 12 countries from South America.