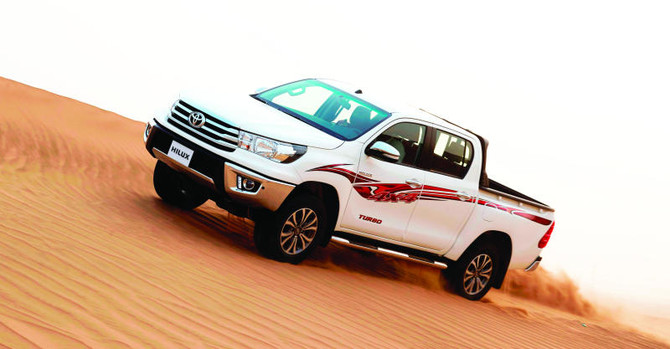 RIYADH: Motor giant Abdul Latif Jameel (ALJ) and Toyota launched here Wednesday night the eighth-generation Hilux, which goes on sale across the Gulf countries, including Saudi Arabia this week.
The all-new Hilux gets a new look with more toughness as the vehicle’s body sits on a newly developed strong frame structure.
“The new pickups are available in single and double cabins and the deck itself has been upgraded with structure panels that have been strengthened,” said Faisal Abdallah, ALJ vice president, while speaking at the launching ceremony here at the Four Seasons Hotel. Top ALJ and Toyota executives, auto industry leaders and local newsmen attended the event.
Toyota officials told Arab News on the sidelines of the launch that Toyota ranked number one motor company in terms of sales that exceeded 10.2 million vehicles last year. They include more than 700,000 vehicles sold by Toyota and its partners across the GCC. Of course, ALJ tops the list with more than 300,000 units sold last year alone.
Prominent among those present on the occasion included Hiroki Nakajima, chief executive engineer and managing officer of Toyota Motor Corporation; Takashi Obata, Toyota general manager for sales in Middle East and North Africa (MENA); Takayuki Yoshitsugu, Toyota’s chief representative in the MENA region; and Faisal W. Mirza, ALJ’s senior general manager for marketing communications.
In his presentation on the new Hilux, Nakajima, said: “Our entire development concept was centered on redefining toughness. We aimed to make new Hilux tougher based on a much broader interpretation of that word. The Hilux also offers the comfort of an SUV, making it the go-to vehicle, whether its primary use is commercial or personal,” said Hassan Jameel, ALJ’s vice chairman for domestic operation.
In fact, the name Hilux, a combination of the words ‘high’ and ‘luxury’ was given to underline the truck’s splendor and superiority over the competitors, and the new slogan best illustrates its reputation as a sturdy, all conquering vehicle constantly evolving to set new benchmarks for comfort and performance.
The new Hilux is offered in Saudi Arabia in single-cab and double-cab configurations, in both 2WS and 4WD.
Speaking on the occasion, Obata said Hilux is completely genuine, authentic and consistent with the Hilux brand, delivering the high standards and durability and reliability that have always been the core values.
Based on policy that always puts the guest first and demands nothing short of excellence, ALJ’s companies provide support for the great ubiquity of Toyota vehicles in the Saudi market through a sprawling network of strategically placed sales and service centers, he added.