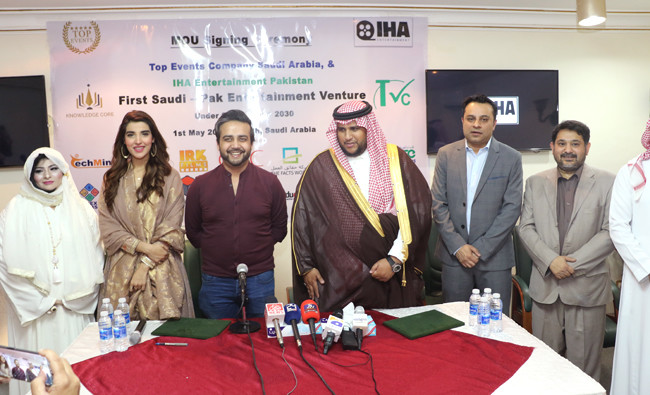 RIYADH: An agreement between the Top Events Company (TEC) of Saudi Arabia and IHA Entertainment of Pakistan has been signed to facilitate the screening and co-production of Pakistani films in the Kingdom.

The agreement will encourage collaboration between the two countries, especially in the fields of film screening, production, technology, dramas and digital productions.

This was disclosed by Prince Abdulaziz bin Matab Al-Saud, chief of the Top Events Company, who inked the agreement on behalf of the Top Events, recently in Riyadh. Imran Raza Kazmi, chief executive of IHA Entertainment, signed the MoU from the Pakistani side. The signing ceremony was attended by Pakistani film and television actress Hareem Farooq.

Prince Abdulaziz said: “Saudi Arabia is like the second home for Pakistani expatriates, and I am happy to announce the collaboration with the Pakistani film industry. The MoU will go a long way in promoting cooperation between the Kingdom and Pakistan in film screening, movie production and dramas within the framework of the Saudi Vision 2030 of Crown Prince Mohammed bin Salman.” Hareem, who played the role of a lady gangster in the hit film Parchi, said: “There is a growing scope of cooperation in film industry between the Kingdom and Pakistan.”

“There are opportunities to produce films and dramas in the Kingdom,” said Raza Kazmi.

Answering a question about the filmmaking in Saudi Arabia, Amir Shahzad, chief operating officer at TEC, said that “Pakistan, where more than 10,000 Urdu-feature films have been produced since 1948, has the expertise to offer much to the Kingdom in filmmaking.

“There is a growing interest and momentum in Pakistani cinema,” said Shahzad, referring to the new breed of cinematographers, producers, directors, and technicians.